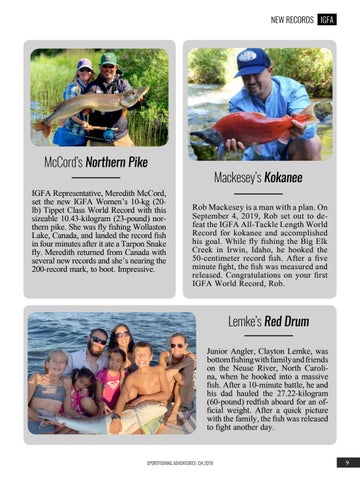 Mackesey’s Kokanee Rob Mackesey is a man with a plan. On September 4, 2019, Rob set out to defeat the IGFA All-Tackle Length World Record for kokanee and accomplished his goal. While fly fishing the Big Elk Creek in Irwin, Idaho, he hooked the 50-centimeter record fish. After a five minute fight, the fish was measured and released. Congratulations on your first IGFA World Record, Rob.

Lemke’s Red Drum Junior Angler, Clayton Lemke, was bottom fishing with family and friends on the Neuse River, North Carolina, when he hooked into a massive fish. After a 10-minute battle, he and his dad hauled the 27.22-kilogram (60-pound) redfish aboard for an official weight. After a quick picture with the family, the fish was released to fight another day.