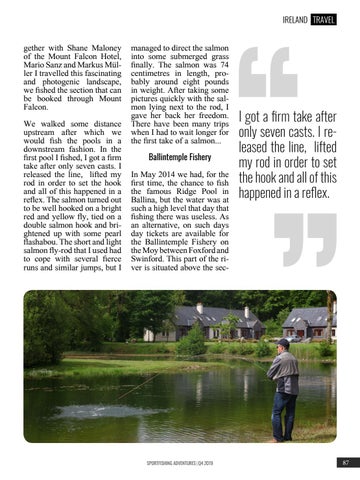 gether with Shane Maloney of the Mount Falcon Hotel, Mario Sanz and Markus MĂźller I travelled this fascinating and photogenic landscape, we fished the section that can be booked through Mount Falcon. We walked some distance upstream after which we would fish the pools in a downstream fashion. In the first pool I fished, I got a firm take after only seven casts. I released the line, lifted my rod in order to set the hook and all of this happened in a reflex. The salmon turned out to be well hooked on a bright red and yellow fly, tied on a double salmon hook and brightened up with some pearl flashabou. The short and light salmon fly-rod that I used had to cope with several fierce runs and similar jumps, but I

managed to direct the salmon into some submerged grass finally. The salmon was 74 centimetres in length, probably around eight pounds in weight. After taking some pictures quickly with the salmon lying next to the rod, I gave her back her freedom. There have been many trips when I had to wait longer for the first take of a salmon... Ballintemple Fishery In May 2014 we had, for the first time, the chance to fish the famous Ridge Pool in Ballina, but the water was at such a high level that day that fishing there was useless. As an alternative, on such days day tickets are available for the Ballintemple Fishery on the Moy between Foxford and Swinford. This part of the river is situated above the sec-

I got a firm take after only seven casts. I released the line, lifted my rod in order to set the hook and all of this happened in a reflex.