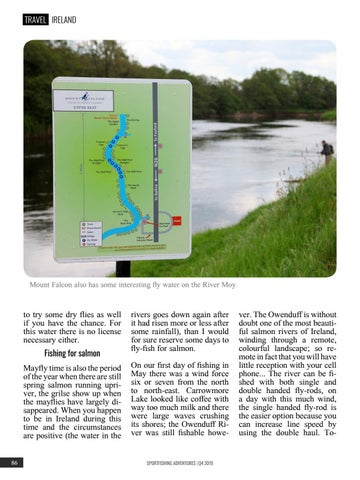 Mount Falcon also has some interesting fly water on the River Moy.

to try some dry flies as well if you have the chance. For this water there is no license necessary either. Fishing for salmon Mayfly time is also the period of the year when there are still spring salmon running upriver, the grilse show up when the mayflies have largely disappeared. When you happen to be in Ireland during this time and the circumstances are positive (the water in the 86

rivers goes down again after it had risen more or less after some rainfall), than I would for sure reserve some days to fly-fish for salmon. On our first day of fishing in May there was a wind force six or seven from the north to north-east. Carrowmore Lake looked like coffee with way too much milk and there were large waves crushing its shores; the Owenduff River was still fishable howeSPORTFISHING ADVENTURES | Q4 2019

ver. The Owenduff is without doubt one of the most beautiful salmon rivers of Ireland, winding through a remote, colourful landscape; so remote in fact that you will have little reception with your cell phone... The river can be fished with both single and double handed fly-rods, on a day with this much wind, the single handed fly-rod is the easier option because you can increase line speed by using the double haul. To-