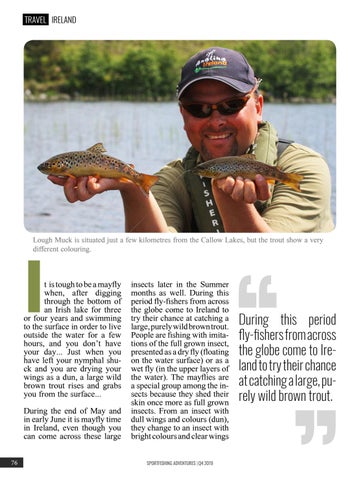 Lough Muck is situated just a few kilometres from the Callow Lakes, but the trout show a very different colouring.

t is tough to be a mayfly when, after digging through the bottom of an Irish lake for three or four years and swimming to the surface in order to live outside the water for a few hours, and you donâ&#x20AC;&#x2122;t have your day... Just when you have left your nymphal shuck and you are drying your wings as a dun, a large wild brown trout rises and grabs you from the surface... During the end of May and in early June it is mayfly time in Ireland, even though you can come across these large

insects later in the Summer months as well. During this period fly-fishers from across the globe come to Ireland to try their chance at catching a large, purely wild brown trout. People are fishing with imitations of the full grown insect, presented as a dry fly (floating on the water surface) or as a wet fly (in the upper layers of the water). The mayflies are a special group among the insects because they shed their skin once more as full grown insects. From an insect with dull wings and colours (dun), they change to an insect with bright colours and clear wings SPORTFISHING ADVENTURES | Q4 2019

During this period fly-fishers from across the globe come to Ireland to try their chance at catching a large, purely wild brown trout.