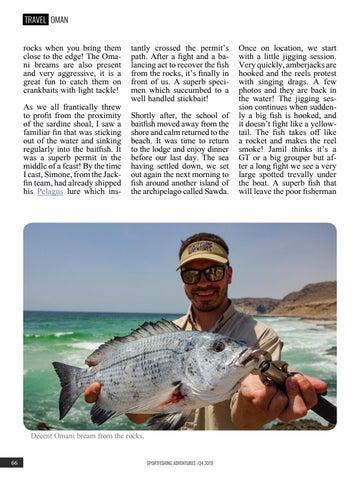 rocks when you bring them close to the edge! The Omani breams are also present and very aggressive, it is a great fun to catch them on crankbaits with light tackle! As we all frantically threw to profit from the proximity of the sardine shoal, I saw a familiar fin that was sticking out of the water and sinking regularly into the baitfish. It was a superb permit in the middle of a feast! By the time I cast, Simone, from the Jackfin team, had already shipped his Pelagus lure which ins-

tantly crossed the permit’s path. After a fight and a balancing act to recover the fish from the rocks, it’s finally in front of us. A superb specimen which succumbed to a well handled stickbait! Shortly after, the school of baitfish moved away from the shore and calm returned to the beach. It was time to return to the lodge and enjoy dinner before our last day. The sea having settled down, we set out again the next morning to fish around another island of the archipelago called Sawda.

Decent Omani bream from the rocks. 66

Once on location, we start with a little jigging session. Very quickly, amberjacks are hooked and the reels protest with singing drags. A few photos and they are back in the water! The jigging session continues when suddenly a big fish is hooked, and it doesn’t fight like a yellowtail. The fish takes off like a rocket and makes the reel smoke! Jamil thinks it’s a GT or a big grouper but after a long fight we see a very large spotted trevally under the boat. A superb fish that will leave the poor fisherman