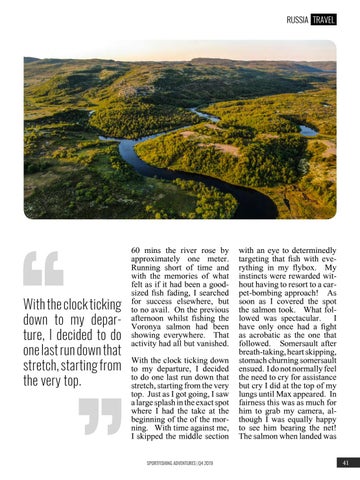 With the clock ticking down to my departure, I decided to do one last run down that stretch, starting from the very top.

60 mins the river rose by approximately one meter. Running short of time and with the memories of what felt as if it had been a goodsized fish fading, I searched for success elsewhere, but to no avail. On the previous afternoon whilst fishing the Voronya salmon had been showing everywhere. That activity had all but vanished. With the clock ticking down to my departure, I decided to do one last run down that stretch, starting from the very top. Just as I got going, I saw a large splash in the exact spot where I had the take at the beginning of the of the morning. With time against me, I skipped the middle section SPORTFISHING ADVENTURES | Q4 2019

with an eye to determinedly targeting that fish with everything in my flybox. My instincts were rewarded without having to resort to a carpet-bombing approach! As soon as I covered the spot the salmon took. What followed was spectacular. I have only once had a fight as acrobatic as the one that followed. Somersault after breath-taking, heart skipping, stomach churning somersault ensued. I do not normally feel the need to cry for assistance but cry I did at the top of my lungs until Max appeared. In fairness this was as much for him to grab my camera, although I was equally happy to see him bearing the net! The salmon when landed was 41