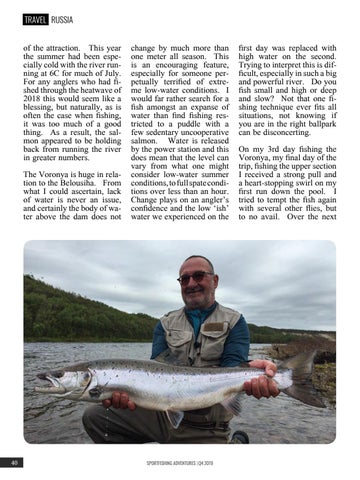 of the attraction. This year the summer had been especially cold with the river running at 6C for much of July. For any anglers who had fished through the heatwave of 2018 this would seem like a blessing, but naturally, as is often the case when fishing, it was too much of a good thing. As a result, the salmon appeared to be holding back from running the river in greater numbers. The Voronya is huge in relation to the Belousiha. From what I could ascertain, lack of water is never an issue, and certainly the body of water above the dam does not

change by much more than one meter all season. This is an encouraging feature, especially for someone perpetually terrified of extreme low-water conditions. I would far rather search for a fish amongst an expanse of water than find fishing restricted to a puddle with a few sedentary uncooperative salmon. Water is released by the power station and this does mean that the level can vary from what one might consider low-water summer conditions, to full spate conditions over less than an hour. Change plays on an angler’s confidence and the low ‘ish’ water we experienced on the

first day was replaced with high water on the second. Trying to interpret this is difficult, especially in such a big and powerful river. Do you fish small and high or deep and slow? Not that one fishing technique ever fits all situations, not knowing if you are in the right ballpark can be disconcerting. On my 3rd day fishing the Voronya, my final day of the trip, fishing the upper section I received a strong pull and a heart-stopping swirl on my first run down the pool. I tried to tempt the fish again with several other flies, but to no avail. Over the next