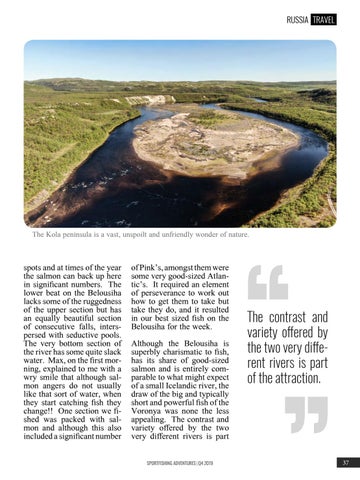 The Kola peninsula is a vast, unspoilt and unfriendly wonder of nature.

spots and at times of the year the salmon can back up here in significant numbers. The lower beat on the Belousiha lacks some of the ruggedness of the upper section but has an equally beautiful section of consecutive falls, interspersed with seductive pools. The very bottom section of the river has some quite slack water. Max, on the first morning, explained to me with a wry smile that although salmon angers do not usually like that sort of water, when they start catching fish they change!! One section we fished was packed with salmon and although this also included a significant number

of Pinkâ&#x20AC;&#x2122;s, amongst them were some very good-sized Atlanticâ&#x20AC;&#x2122;s. It required an element of perseverance to work out how to get them to take but take they do, and it resulted in our best sized fish on the Belousiha for the week. Although the Belousiha is superbly charismatic to fish, has its share of good-sized salmon and is entirely comparable to what might expect of a small Icelandic river, the draw of the big and typically short and powerful fish of the Voronya was none the less appealing. The contrast and variety offered by the two very different rivers is part SPORTFISHING ADVENTURES | Q4 2019

The contrast and variety offered by the two very different rivers is part of the attraction.