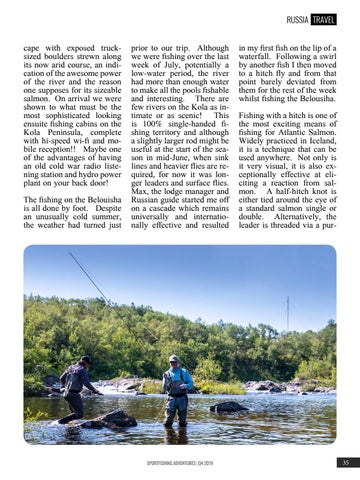 cape with exposed trucksized boulders strewn along its now arid course, an indication of the awesome power of the river and the reason one supposes for its sizeable salmon. On arrival we were shown to what must be the most sophisticated looking ensuite fishing cabins on the Kola Peninsula, complete with hi-speed wi-fi and mobile reception!! Maybe one of the advantages of having an old cold war radio listening station and hydro power plant on your back door! The fishing on the Belouisha is all done by foot. Despite an unusually cold summer, the weather had turned just

prior to our trip. Although we were fishing over the last week of July, potentially a low-water period, the river had more than enough water to make all the pools fishable and interesting. There are few rivers on the Kola as intimate or as scenic! This is 100% single-handed fishing territory and although a slightly larger rod might be useful at the start of the season in mid-June, when sink lines and heavier flies are required, for now it was longer leaders and surface flies. Max, the lodge manager and Russian guide started me off on a cascade which remains universally and internationally effective and resulted

in my first fish on the lip of a waterfall. Following a swirl by another fish I then moved to a hitch fly and from that point barely deviated from them for the rest of the week whilst fishing the Belousiha. Fishing with a hitch is one of the most exciting means of fishing for Atlantic Salmon. Widely practiced in Iceland, it is a technique that can be used anywhere. Not only is it very visual, it is also exceptionally effective at eliciting a reaction from salmon. A half-hitch knot is either tied around the eye of a standard salmon single or double. Alternatively, the leader is threaded via a pur-