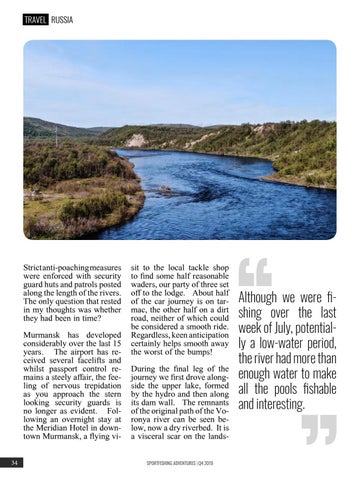 Strict anti-poaching measures were enforced with security guard huts and patrols posted along the length of the rivers. The only question that rested in my thoughts was whether they had been in time? Murmansk has developed considerably over the last 15 years. The airport has received several facelifts and whilst passport control remains a steely affair, the feeling of nervous trepidation as you approach the stern looking security guards is no longer as evident. Following an overnight stay at the Meridian Hotel in downtown Murmansk, a flying vi34

sit to the local tackle shop to find some half reasonable waders, our party of three set off to the lodge. About half of the car journey is on tarmac, the other half on a dirt road, neither of which could be considered a smooth ride. Regardless, keen anticipation certainly helps smooth away the worst of the bumps! During the final leg of the journey we first drove alongside the upper lake, formed by the hydro and then along its dam wall. The remnants of the original path of the Voronya river can be seen below, now a dry riverbed. It is a visceral scar on the landsSPORTFISHING ADVENTURES | Q4 2019

Although we were fishing over the last week of July, potentially a low-water period, the river had more than enough water to make all the pools fishable and interesting.