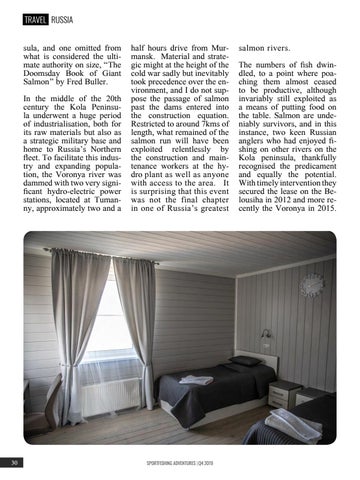 sula, and one omitted from what is considered the ultimate authority on size, “The Doomsday Book of Giant Salmon” by Fred Buller. In the middle of the 20th century the Kola Peninsula underwent a huge period of industrialisation, both for its raw materials but also as a strategic military base and home to Russia’s Northern fleet. To facilitate this industry and expanding population, the Voronya river was dammed with two very significant hydro-electric power stations, located at Tumanny, approximately two and a

half hours drive from Murmansk. Material and strategic might at the height of the cold war sadly but inevitably took precedence over the environment, and I do not suppose the passage of salmon past the dams entered into the construction equation. Restricted to around 7kms of length, what remained of the salmon run will have been exploited relentlessly by the construction and maintenance workers at the hydro plant as well as anyone with access to the area. It is surprising that this event was not the final chapter in one of Russia’s greatest

salmon rivers. The numbers of fish dwindled, to a point where poaching them almost ceased to be productive, although invariably still exploited as a means of putting food on the table. Salmon are undeniably survivors, and in this instance, two keen Russian anglers who had enjoyed fishing on other rivers on the Kola peninsula, thankfully recognised the predicament and equally the potential. With timely intervention they secured the lease on the Belousiha in 2012 and more recently the Voronya in 2015.