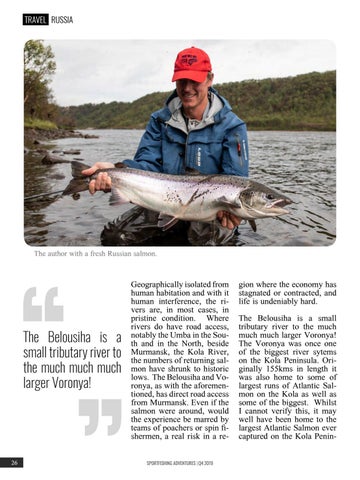 The author with a fresh Russian salmon.

The Belousiha is a small tributary river to the much much much larger Voronya!

Geographically isolated from human habitation and with it human interference, the rivers are, in most cases, in pristine condition. Where rivers do have road access, notably the Umba in the South and in the North, beside Murmansk, the Kola River, the numbers of returning salmon have shrunk to historic lows. The Belousiha and Voronya, as with the aforementioned, has direct road access from Murmansk. Even if the salmon were around, would the experience be marred by teams of poachers or spin fishermen, a real risk in a reSPORTFISHING ADVENTURES | Q4 2019

gion where the economy has stagnated or contracted, and life is undeniably hard. The Belousiha is a small tributary river to the much much much larger Voronya! The Voronya was once one of the biggest river sytems on the Kola Peninsula. Originally 155kms in length it was also home to some of largest runs of Atlantic Salmon on the Kola as well as some of the biggest. Whilst I cannot verify this, it may well have been home to the largest Atlantic Salmon ever captured on the Kola Penin-