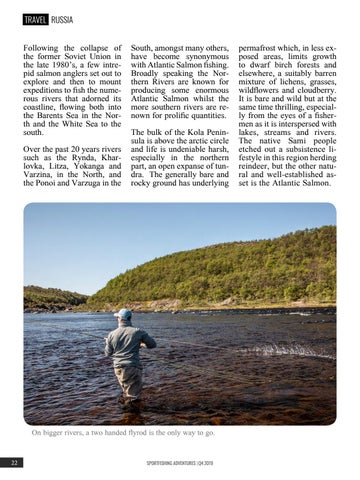 Following the collapse of the former Soviet Union in the late 1980â&#x20AC;&#x2122;s, a few intrepid salmon anglers set out to explore and then to mount expeditions to fish the numerous rivers that adorned its coastline, flowing both into the Barents Sea in the North and the White Sea to the south. Over the past 20 years rivers such as the Rynda, Kharlovka, Litza, Yokanga and Varzina, in the North, and the Ponoi and Varzuga in the

South, amongst many others, have become synonymous with Atlantic Salmon fishing. Broadly speaking the Northern Rivers are known for producing some enormous Atlantic Salmon whilst the more southern rivers are renown for prolific quantities. The bulk of the Kola Peninsula is above the arctic circle and life is undeniable harsh, especially in the northern part, an open expanse of tundra. The generally bare and rocky ground has underlying

On bigger rivers, a two handed flyrod is the only way to go.

permafrost which, in less exposed areas, limits growth to dwarf birch forests and elsewhere, a suitably barren mixture of lichens, grasses, wildflowers and cloudberry. It is bare and wild but at the same time thrilling, especially from the eyes of a fishermen as it is interspersed with lakes, streams and rivers. The native Sami people etched out a subsistence lifestyle in this region herding reindeer, but the other natural and well-established asset is the Atlantic Salmon.