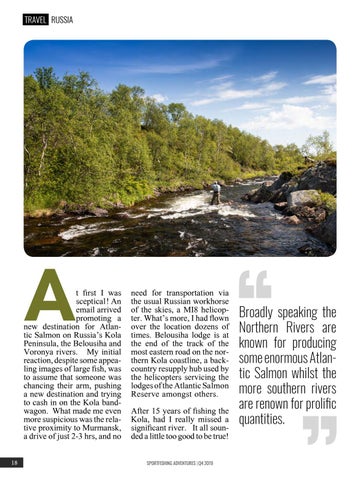 t first I was sceptical ! An email arrived promoting a new destination for Atlantic Salmon on Russiaâ&#x20AC;&#x2122;s Kola Peninsula, the Belousiha and Voronya rivers. My initial reaction, despite some appealing images of large fish, was to assume that someone was chancing their arm, pushing a new destination and trying to cash in on the Kola bandwagon. What made me even more suspicious was the relative proximity to Murmansk, a drive of just 2-3 hrs, and no

need for transportation via the usual Russian workhorse of the skies, a MI8 helicopter. Whatâ&#x20AC;&#x2122;s more, I had flown over the location dozens of times. Belousiha lodge is at the end of the track of the most eastern road on the northern Kola coastline, a backcountry resupply hub used by the helicopters servicing the lodges of the Atlantic Salmon Reserve amongst others. After 15 years of fishing the Kola, had I really missed a significant river. It all sounded a little too good to be true! SPORTFISHING ADVENTURES | Q4 2019

Broadly speaking the Northern Rivers are known for producing some enormous Atlantic Salmon whilst the more southern rivers are renown for prolific quantities.