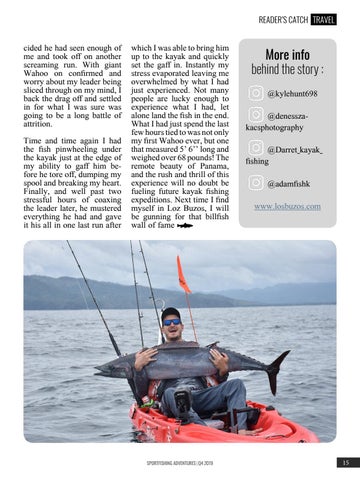 cided he had seen enough of me and took off on another screaming run. With giant Wahoo on confirmed and worry about my leader being sliced through on my mind, I back the drag off and settled in for what I was sure was going to be a long battle of attrition. Time and time again I had the fish pinwheeling under the kayak just at the edge of my ability to gaff him before he tore off, dumping my spool and breaking my heart. Finally, and well past two stressful hours of coaxing the leader later, he mustered everything he had and gave it his all in one last run after

which I was able to bring him up to the kayak and quickly set the gaff in. Instantly my stress evaporated leaving me overwhelmed by what I had just experienced. Not many people are lucky enough to experience what I had, let alone land the fish in the end. What I had just spend the last few hours tied to was not only my first Wahoo ever, but one that measured 5’ 6’’ long and weighed over 68 pounds! The remote beauty of Panama, and the rush and thrill of this experience will no doubt be fueling future kayak fishing expeditions. Next time I find myself in Loz Buzos, I will be gunning for that billfish wall of fame