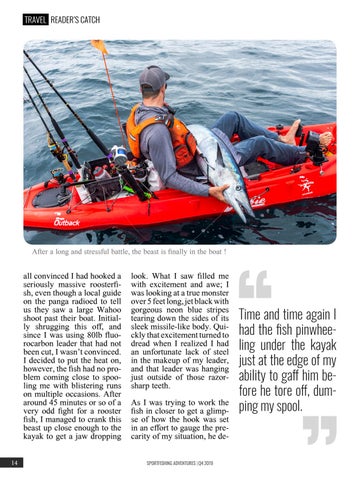 After a long and stressful battle, the beast is finally in the boat !

all convinced I had hooked a seriously massive roosterfish, even though a local guide on the panga radioed to tell us they saw a large Wahoo shoot past their boat. Initially shrugging this off, and since I was using 80lb fluorocarbon leader that had not been cut, I wasnâ&#x20AC;&#x2122;t convinced. I decided to put the heat on, however, the fish had no problem coming close to spooling me with blistering runs on multiple occasions. After around 45 minutes or so of a very odd fight for a rooster fish, I managed to crank this beast up close enough to the kayak to get a jaw dropping 14

look. What I saw filled me with excitement and awe; I was looking at a true monster over 5 feet long, jet black with gorgeous neon blue stripes tearing down the sides of its sleek missile-like body. Quickly that excitement turned to dread when I realized I had an unfortunate lack of steel in the makeup of my leader, and that leader was hanging just outside of those razorsharp teeth. As I was trying to work the fish in closer to get a glimpse of how the hook was set in an effort to gauge the precarity of my situation, he deSPORTFISHING ADVENTURES | Q4 2019

Time and time again I had the fish pinwheeling under the kayak just at the edge of my ability to gaff him before he tore off, dumping my spool.