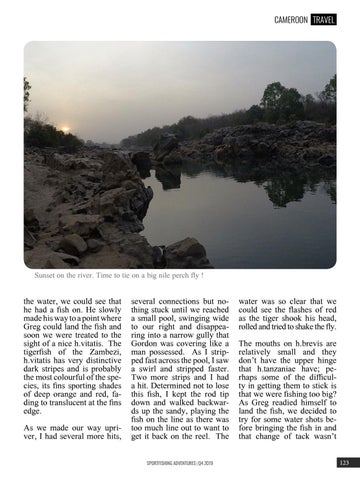 Sunset on the river. Time to tie on a big nile perch fly !

the water, we could see that he had a fish on. He slowly made his way to a point where Greg could land the fish and soon we were treated to the sight of a nice h.vitatis. The tigerfish of the Zambezi, h.vitatis has very distinctive dark stripes and is probably the most colourful of the species, its fins sporting shades of deep orange and red, fading to translucent at the fins edge. As we made our way upriver, I had several more hits,

several connections but nothing stuck until we reached a small pool, swinging wide to our right and disappearing into a narrow gully that Gordon was covering like a man possessed. As I stripped fast across the pool, I saw a swirl and stripped faster. Two more strips and I had a hit. Determined not to lose this fish, I kept the rod tip down and walked backwards up the sandy, playing the fish on the line as there was too much line out to want to get it back on the reel. The SPORTFISHING ADVENTURES | Q4 2019

water was so clear that we could see the flashes of red as the tiger shook his head, rolled and tried to shake the fly. The mouths on h.brevis are relatively small and they donâ&#x20AC;&#x2122;t have the upper hinge that h.tanzaniae have; perhaps some of the difficulty in getting them to stick is that we were fishing too big? As Greg readied himself to land the fish, we decided to try for some water shots before bringing the fish in and that change of tack wasnâ&#x20AC;&#x2122;t 123