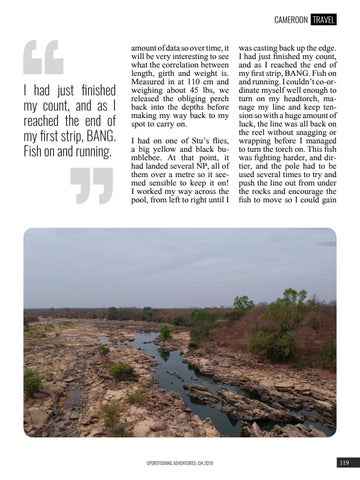 I had just finished my count, and as I reached the end of my first strip, BANG. Fish on and running.

amount of data so over time, it will be very interesting to see what the correlation between length, girth and weight is. Measured in at 110 cm and weighing about 45 lbs, we released the obliging perch back into the depths before making my way back to my spot to carry on. I had on one of Stuâ&#x20AC;&#x2122;s flies, a big yellow and black bumblebee. At that point, it had landed several NP, all of them over a metre so it seemed sensible to keep it on! I worked my way across the pool, from left to right until I

was casting back up the edge. I had just finished my count, and as I reached the end of my first strip, BANG. Fish on and running. I couldnâ&#x20AC;&#x2122;t co-ordinate myself well enough to turn on my headtorch, manage my line and keep tension so with a huge amount of luck, the line was all back on the reel without snagging or wrapping before I managed to turn the torch on. This fish was fighting harder, and dirtier, and the pole had to be used several times to try and push the line out from under the rocks and encourage the fish to move so I could gain