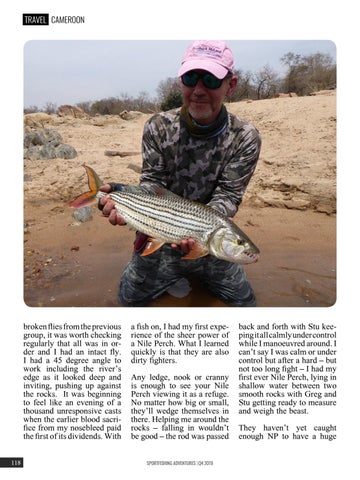 broken flies from the previous group, it was worth checking regularly that all was in order and I had an intact fly. I had a 45 degree angle to work including the river’s edge as it looked deep and inviting, pushing up against the rocks. It was beginning to feel like an evening of a thousand unresponsive casts when the earlier blood sacrifice from my nosebleed paid the first of its dividends. With 118

a fish on, I had my first experience of the sheer power of a Nile Perch. What I learned quickly is that they are also dirty fighters. Any ledge, nook or cranny is enough to see your Nile Perch viewing it as a refuge. No matter how big or small, they’ll wedge themselves in there. Helping me around the rocks – falling in wouldn’t be good – the rod was passed SPORTFISHING ADVENTURES | Q4 2019

back and forth with Stu keeping it all calmly under control while I manoeuvred around. I can’t say I was calm or under control but after a hard – but not too long fight – I had my first ever Nile Perch, lying in shallow water between two smooth rocks with Greg and Stu getting ready to measure and weigh the beast. They haven’t yet caught enough NP to have a huge