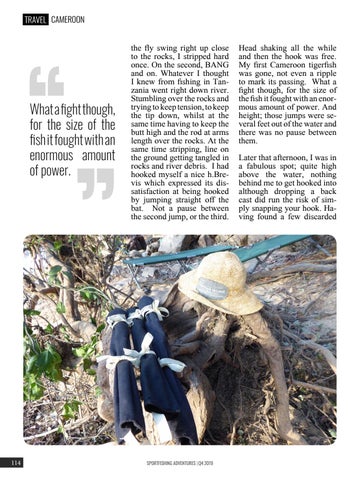 What a fight though, for the size of the fish it fought with an enormous amount of power.

the fly swing right up close to the rocks, I stripped hard once. On the second, BANG and on. Whatever I thought I knew from fishing in Tanzania went right down river. Stumbling over the rocks and trying to keep tension, to keep the tip down, whilst at the same time having to keep the butt high and the rod at arms length over the rocks. At the same time stripping, line on the ground getting tangled in rocks and river debris. I had hooked myself a nice h.Brevis which expressed its dissatisfaction at being hooked by jumping straight off the bat. Not a pause between the second jump, or the third.

Head shaking all the while and then the hook was free. My first Cameroon tigerfish was gone, not even a ripple to mark its passing. What a fight though, for the size of the fish it fought with an enormous amount of power. And height; those jumps were several feet out of the water and there was no pause between them. Later that afternoon, I was in a fabulous spot; quite high above the water, nothing behind me to get hooked into although dropping a back cast did run the risk of simply snapping your hook. Having found a few discarded