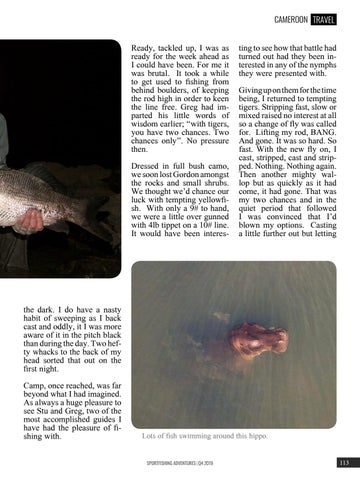 Ready, tackled up, I was as ready for the week ahead as I could have been. For me it was brutal. It took a while to get used to fishing from behind boulders, of keeping the rod high in order to keen the line free. Greg had imparted his little words of wisdom earlier; “with tigers, you have two chances. Two chances only”. No pressure then. Dressed in full bush camo, we soon lost Gordon amongst the rocks and small shrubs. We thought we’d chance our luck with tempting yellowfish. With only a 9# to hand, we were a little over gunned with 4lb tippet on a 10# line. It would have been interes-

ting to see how that battle had turned out had they been interested in any of the nymphs they were presented with. Giving up on them for the time being, I returned to tempting tigers. Stripping fast, slow or mixed raised no interest at all so a change of fly was called for. Lifting my rod, BANG. And gone. It was so hard. So fast. With the new fly on, I cast, stripped, cast and stripped. Nothing. Nothing again. Then another mighty wallop but as quickly as it had come, it had gone. That was my two chances and in the quiet period that followed I was convinced that I’d blown my options. Casting a little further out but letting

the dark. I do have a nasty habit of sweeping as I back cast and oddly, it I was more aware of it in the pitch black than during the day. Two hefty whacks to the back of my head sorted that out on the first night. Camp, once reached, was far beyond what I had imagined. As always a huge pleasure to see Stu and Greg, two of the most accomplished guides I have had the pleasure of fishing with.

Lots of fish swimming around this hippo. SPORTFISHING ADVENTURES | Q4 2019