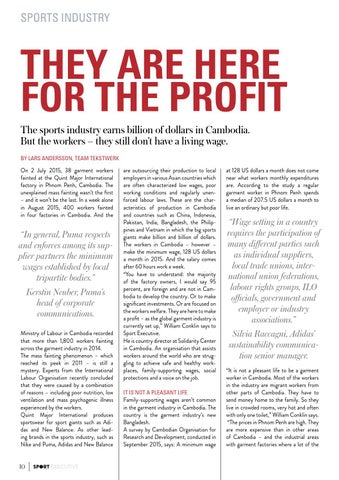 THEY ARE HERE FOR THE PROFIT The sports industry earns billion of dollars in Cambodia. But the workers – they still don’t have a living wage. BY LARS ANDERSSON, TEAM TEKSTWERK On 2 July 2015, 38 garment workers fainted at the Quint Major International factory in Phnom Penh, Cambodia. The unexplained mass fainting wasn’t the first – and it won’t be the last. In a week alone in August 2015, 400 workers fainted in four factories in Cambodia. And the

“In general, Puma respects and enforces among its supplier partners the minimum wages established by local tripartite bodies.” Kerstin Neuber, Puma’s head of corporate communications. Ministry of Labour in Cambodia recorded that more than 1,800 workers fainting across the garment industry in 2014. The mass fainting phenomenon – which reached its peek in 2011 – is still a mystery. Experts from the International Labour Organisation recently concluded that they were caused by a combination of reasons – including poor nutrition, low ventilation and mass psychogenic illness experienced by the workers. Quint Major International produces sportswear for sport giants such as Adidas and New Balance. As other leading brands in the sports industry, such as Nike and Puma, Adidas and New Balance

are outsourcing their production to local employers in various Asian countries which are often characterized low wages, poor working conditions and regularly unenforced labour laws. These are the characteristics of production in Cambodia and countries such as China, Indonesia, Pakistan, India, Bangladesh, the Philippines and Vietnam in which the big sports giants make billion and billion of dollars. The workers in Cambodia – however – make the minimum wage, 128 US dollars a month in 2015. And the salary comes after 60 hours work a week. “You have to understand: the majority of the factory owners, I would say 95 percent, are foreign and are not in Cambodia to develop the country. Or to make significant investments. Or are focused on the workers welfare. They are here to make a profit – as the global garment industry is currently set up,” William Conklin says to Sport Executive. He is country director at Solidarity Center in Cambodia. An organisation that assists workers around the world who are struggling to achieve safe and healthy workplaces, family-supporting wages, social protections and a voice on the job. IT IS NOT A PLEASANT LIFE Family-supporting wages aren’t common in the garment industry in Cambodia. The country is the garment industry’s new Bangladesh. A survey by Cambodian Organisation for Research and Development, conducted in September 2015, says: A minimum wage

“Wage setting in a country requires the participation of many different parties such as individual suppliers, local trade unions, international union federations, labour rights groups, ILO officials, government and employer or industry associations.” Silvia Raccagni, Adidas’ sustainability communication senior manager. “It is not a pleasant life to be a garment worker in Cambodia. Most of the workers in the industry are migrant workers from other parts of Cambodia. They have to send money home to the family. So they live in crowded rooms, very hot and often with only one toilet,” William Conklin says. “The prices in Phnom Penh are high. They are more expensive than in other areas of Cambodia – and the industrial areas with garment factories where a lot of the 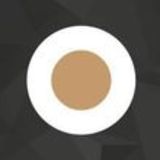