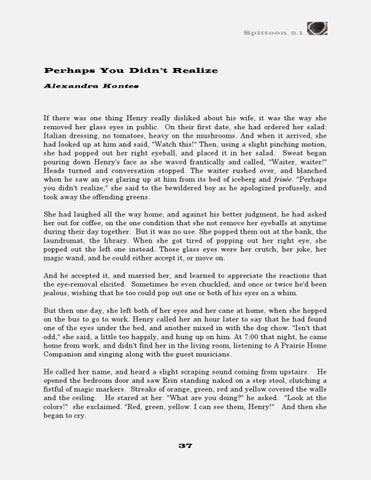 If there was one thing Henry really disliked about his wife, it was the way she removed her glass eyes in public. On their first date, she had ordered her salad: Italian dressing, no tomatoes, heavy on the mushrooms. And when it arrived, she had looked up at him and said, "Watch this!" Then, using a slight pinching motion, she had popped out her right eyeball, and placed it in her salad. Sweat began pouring down Henry's face as she waved frantically and called, "Waiter, waiter!" Heads turned and conversation stopped. The waiter rushed over, and blanched when he saw an eye glaring up at him from its bed of iceberg and frisĂŠe. "Perhaps you didn't realize," she said to the bewildered boy as he apologized profusely, and took away the offending greens. She had laughed all the way home, and against his better judgment, he had asked her out for coffee, on the one condition that she not remove her eyeballs at anytime during their day together. But it was no use. She popped them out at the bank, the laundromat, the library. When she got tired of popping out her right eye, she popped out the left one instead. Those glass eyes were her crutch, her joke, her magic wand, and he could either accept it, or move on. And he accepted it, and married her, and learned to appreciate the reactions that the eye-removal elicited. Sometimes he even chuckled, and once or twice he'd been jealous, wishing that he too could pop out one or both of his eyes on a whim. But then one day, she left both of her eyes and her cane at home, when she hopped on the bus to go to work. Henry called her an hour later to say that he had found one of the eyes under the bed, and another mixed in with the dog chow. "Isn't that odd," she said, a little too happily, and hung up on him. At 7:00 that night, he came home from work, and didn't find her in the living room, listening to A Prairie Home Companion and singing along with the guest musicians. He called her name, and heard a slight scraping sound coming from upstairs. He opened the bedroom door and saw Erin standing naked on a step stool, clutching a fistful of magic markers. Streaks of orange, green, red and yellow covered the walls and the ceiling. He stared at her. "What are you doing?" he asked. "Look at the colors!" she exclaimed. "Red, green, yellow. I can see them, Henry!" And then she began to cry. 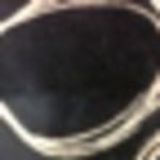 Spittoon is a quarterly, independent literary zine dedicated to the publication of quality contemporary and experimental poetry, creative no...

Spittoon is a quarterly, independent literary zine dedicated to the publication of quality contemporary and experimental poetry, creative no...