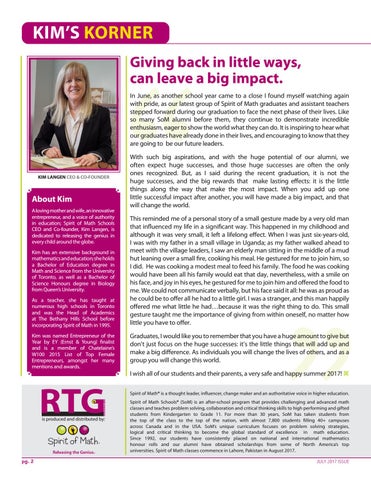 KIM’S KORNER Giving back in little ways, can leave a big impact. In June, as another school year came to a close I found myself watching again with pride, as our latest group of Spirit of Math graduates and assistant teachers stepped forward during our graduation to face the next phase of their lives. Like so many SoM alumni before them, they continue to demonstrate incredible enthusiasm, eager to show the world what they can do. It is inspiring to hear what our graduates have already done in their lives, and encouraging to know that they are going to be our future leaders.

About Kim A loving mother and wife, an innovative entrepreneur, and a voice of authority in education; Spirit of Math Schools CEO and Co-founder, Kim Langen, is dedicated to releasing the genius in every child around the globe. Kim has an extensive background in mathematics and education; she holds a Bachelor of Education degree in Math and Science from the University of Toronto, as well as a Bachelor of Science Honours degree in Biology from Queen’s University. As a teacher, she has taught at numerous high schools in Toronto and was the Head of Academics at The Bethany Hills School before incorporating Spirit of Math in 1995. Kim was named Entrepreneur of the Year by EY (Ernst & Young) finalist and is a member of Chatelaine’s W100 2015 List of Top Female Entrepreneurs, amongst her many mentions and awards.

RTG is produced and distributed by: RELEASING THE

With such big aspirations, and with the huge potential of our alumni, we often expect huge successes, and those huge successes are often the only ones recognized. But, as I said during the recent graduation, it is not the huge successes, and the big rewards that make lasting effects: it is the little things along the way that make the most impact. When you add up one little successful impact after another, you will have made a big impact, and that will change the world. This reminded me of a personal story of a small gesture made by a very old man that influenced my life in a significant way. This happened in my childhood and although it was very small, it left a lifelong effect. When I was just six-years-old, I was with my father in a small village in Uganda; as my father walked ahead to meet with the village leaders, I saw an elderly man sitting in the middle of a mud hut leaning over a small fire, cooking his meal. He gestured for me to join him, so I did. He was cooking a modest meal to feed his family. The food he was cooking would have been all his family would eat that day, nevertheless, with a smile on his face, and joy in his eyes, he gestured for me to join him and offered the food to me. We could not communicate verbally, but his face said it all: he was as proud as he could be to offer all he had to a little girl. I was a stranger, and this man happily offered me what little he had…because it was the right thing to do. This small gesture taught me the importance of giving from within oneself, no matter how little you have to offer. Graduates, I would like you to remember that you have a huge amount to give but don’t just focus on the huge successes: it’s the little things that will add up and make a big difference. As individuals you will change the lives of others, and as a group you will change this world. I wish all of our students and their parents, a very safe and happy summer 2017! z Spirit of Math® is a thought leader, influencer, change maker and an authoritative voice in higher education. Spirit of Math Schools® (SoM) is an after-school program that provides challenging and advanced math classes and teaches problem solving, collaboration and critical thinking skills to high performing and gifted students from Kindergarten to Grade 11. For more than 30 years, SoM has taken students from the top of the class to the top of the nation, with almost 7,800 students filling 40+ campuses across Canada and in the USA. SoM’s unique curriculum focuses on problem solving strategies, logical and critical thinking to become the global standard of excellence in math education. Since 1992, our students have consistently placed on national and international mathematics honour rolls and our alumni have obtained scholarships from some of North America’s top universities. Spirit of Math classes commence in Lahore, Pakistan in August 2017. JULY 2017 ISSUE