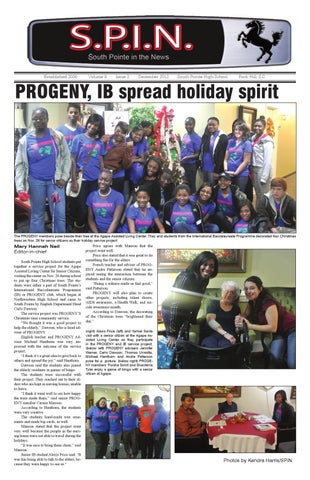 The PROGENY members pose beside their tree at the Agape Assisted Living Center. They and students from the International Baccalaureate Programme decorated four Christmas trees on Nov. 26 for senior citizens as their holiday service project.

Mary Hannah Neil Editor-in-chief South Pointe High School students put together a service project for the Agape Assisted Living Center for Senior Citizens, visiting the center on Nov. 26 during school to put up four Christmas trees. The students were either a part of South Pointe’s International Baccalaureate Programme (IB) or PROGENY club, which began at Northwestern High School and came to South Pointe by English Department Head Carlo Dawson. The service project was PROGENY’S Christmas time community service. “We thought it was a good project to help the elderly,” Dawson, who is head adviser of PROGENY. English teacher and PROGENY Adviser Michael Henthorn was very impressed with the outcome of the service project. “I think it’s a great idea to give back to others and spread the joy,” said Henthorn. Dawson said the students also joined the elderly residents in games of bingo. The students were successful with their project. They reached out to their elders who are kept in nursing homes, unable to leave. “I think it went well to see how happy the trees made them,” said senior PROGENY member Carena Manson. According to Henthorn, the students were very creative. The students hand-made tree ornaments and made big cards, as well. Manson stated that the project went very well because the people in the nursing home were not able to travel during the holidays. “It was nice to bring them cheer,” said Manson. Junior IB student Alexis Price said, “It was fun being able to talk to the elders, because they were happy to see us.”

Price agrees with Manson that the project went well. Price also stated that it was great to do something fun for the elders. French teacher and adviser of PROGENY Andre Patterson stated that he enjoyed seeing the interaction between the students and the senior citizens. “Being a witness made us feel good,” said Patterson. PROGENY will also plan to create other projects, including talent shows, AIDS awareness, a Health Walk, and suicide awareness month. According to Dawson, the decorating of the Christmas trees “brightened their day.” (right) Alexis Price (left) and Yarhiel Santa visit with a senior citizen at the Agape Assisted Living Center as they participate in the PROGENY and IB service project. (below left) PROGENY advisers Jennifer Werner, Carlo Dawson, Thomas Urrestta, Michael Henthorn and Andre Patterson pose for a picture. (below right) PROGENY members Porshe Simril and Shanterria Tyler enjoy a game of bingo with a senior citizen at Agape.