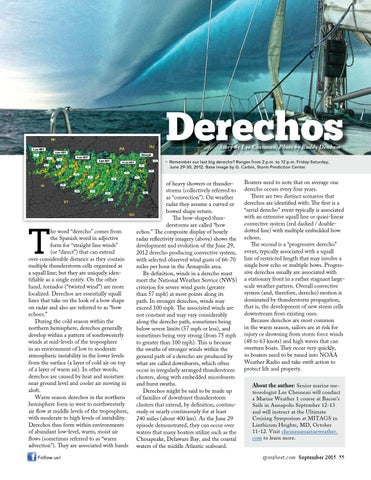 he word “derecho” comes from the Spanish word in adjective form for “straight line winds” (or “direct”) that can extend over considerable distance as they contain multiple thunderstorm cells organized as a squall line; but they are uniquely identifiable as a single entity. On the other hand, tornados (“twisted wind”) are more localized. Derechos are essentially squall lines that take on the look of a bow shape on radar and also are referred to as “bow echoes.” During the cold season within the northern hemisphere, derechos generally develop within a pattern of southwesterly winds at mid-levels of the troposphere in an environment of low to moderate atmospheric instability in the lower levels from the surface (a layer of cold air on top of a layer of warm air). In other words, derechos are caused by heat and moisture near ground level and cooler air moving in aloft. Warm season derechos in the northern hemisphere form in west to northwesterly air flow at middle levels of the troposphere, with moderate to high levels of instability. Derechos thus form within environments of abundant low-level, warm, moist air flows (sometimes referred to as “warm advection”). They are associated with bands Follow us!

of heavy showers or thunderstorms (collectively referred to as “convection”). On weather radar they assume a curved or bowed shape return. The bow-shaped thunderstorms are called “bow echos.” The composite display of hourly radar reflectivity imagery (above) shows the development and evolution of the June 29, 2012 derecho producing convective system, with selected observed wind gusts of 66-70 miles per hour in the Annapolis area. By definition, winds in a derecho must meet the National Weather Service (NWS) criterion for severe wind gusts (greater than 57 mph) at most points along its path. In stronger derechos, winds may exceed 100 mph. The associated winds are not constant and may vary considerably along the derecho path, sometimes being below severe limits (57 mph or less), and sometimes being very strong (from 75 mph to greater than 100 mph). This is because the swaths of stronger winds within the general path of a derecho are produced by what are called downbursts, which often occur in irregularly arranged thunderstorm clusters, along with embedded microbursts and burst swaths. Derechos might be said to be made up of families of downburst thunderstorm clusters that extend, by definition, continuously or nearly continuously for at least 240 miles (about 400 km). As the June 29 episode demonstrated, they can occur over waters that many boaters utilize such as the Chesapeake, Delaware Bay, and the coastal waters of the middle Atlantic seaboard.

Boaters need to note that on average one derecho occurs every four years. There are two distinct scenarios that derechos are identified with: The first is a “serial derecho” event typically is associated with an extensive squall line or quasi-linear convective system (red dashed / doubledotted line) with multiple embedded bow echoes. The second is a “progressive derecho” event, typically associated with a squall line of restricted length that may involve a single bow echo or multiple bows. Progressive derechos usually are associated with a stationary front in a rather stagnant largescale weather pattern. Overall convective system (and, therefore, derecho) motion is dominated by thunderstorm propagation, that is, the development of new storm cells downstream from existing ones. Because derechos are most common in the warm season, sailors are at risk for injury or drowning from storm force winds (48 to 63 knots) and high waves that can overturn boats. They occur very quickly, so boaters need to be tuned into NOAA Weather Radio and take swift action to protect life and property. About the author: Senior marine meteorologist Lee Chesneau will conduct a Marine Weather 1 course at Bacon’s Sails in Annapolis September 12-13 and will instruct at the Ultimate Cruising Symposium at MITAGS in Linthicum Heights, MD, October 11-12. Visit chesneaumarineweather. com to learn more.