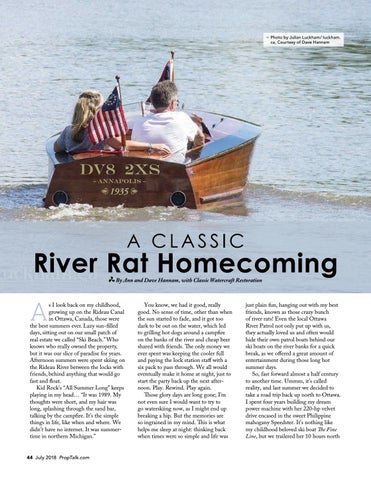 s I look back on my childhood, growing up on the Rideau Canal in Ottawa, Canada, those were the best summers ever. Lazy sun-filled days, sitting out on our small patch of real estate we called “Ski Beach.” Who knows who really owned the property, but it was our slice of paradise for years. Afternoon summers were spent skiing on the Rideau River between the locks with friends, behind anything that would go fast and float. Kid Rock’s “All Summer Long” keeps playing in my head… “It was 1989. My thoughts were short, and my hair was long, splashing through the sand bar, talking by the campfire. It’s the simple things in life, like when and where. We didn’t have no internet. It was summertime in northern Michigan.”

You know, we had it good, really good. No sense of time, other than when the sun started to fade, and it got too dark to be out on the water, which led to grilling hot dogs around a campfire on the banks of the river and cheap beer shared with friends. The only money we ever spent was keeping the cooler full and paying the lock station staff with a six pack to pass through. We all would eventually make it home at night, just to start the party back up the next afternoon. Play. Rewind. Play again. Those glory days are long gone; I’m not even sure I would want to try to go waterskiing now, as I might end up breaking a hip. But the memories are so ingrained in my mind. This is what helps me sleep at night: thinking back when times were so simple and life was

just plain fun, hanging out with my best friends, known as those crazy bunch of river rats! Even the local Ottawa River Patrol not only put up with us, they actually loved us and often would hide their own patrol boats behind our ski boats on the river banks for a quick break, as we offered a great amount of entertainment during those long hot summer days. So, fast forward almost a half century to another time. Ummm, it’s called reality, and last summer we decided to take a road trip back up north to Ottawa. I spent four years building my dream power machine with her 220-hp velvet drive encased in the sweet Philippine mahogany Speedster. It’s nothing like my childhood beloved ski boat The Fine Line, but we trailered her 10 hours north