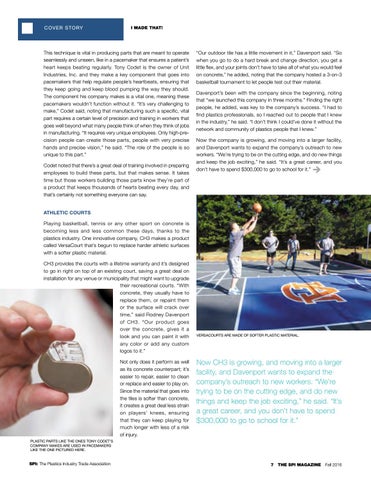 This technique is vital in producing parts that are meant to operate seamlessly and unseen, like in a pacemaker that ensures a patient’s heart keeps beating regularly. Tony Codet is the owner of Unit Industries, Inc. and they make a key component that goes into pacemakers that help regulate people’s heartbeats, ensuring that they keep going and keep blood pumping the way they should. The component his company makes is a vital one, meaning these pacemakers wouldn’t function without it. “It’s very challenging to make,” Codet said, noting that manufacturing such a specific, vital part requires a certain level of precision and training in workers that goes well beyond what many people think of when they think of jobs in manufacturing. “It requires very unique employees. Only high-precision people can create those parts, people with very precise hands and precise vision,” he said. “The role of the people is so unique to this part.” Codet noted that there’s a great deal of training involved in preparing employees to build these parts, but that makes sense. It takes time but those workers building those parts know they’re part of a product that keeps thousands of hearts beating every day, and that’s certainly not something everyone can say.

“Our outdoor tile has a little movement in it,” Davenport said. “So when you go to do a hard break and change direction, you get a little flex, and your joints don’t have to take all of what you would feel on concrete,” he added, noting that the company hosted a 3-on-3 basketball tournament to let people test out their material. Davenport’s been with the company since the beginning, noting that “we launched this company in three months.” Finding the right people, he added, was key to the company’s success. “I had to find plastics professionals, so I reached out to people that I knew in the industry,” he said. “I don’t think I could’ve done it without the network and community of plastics people that I knew.” Now the company is growing, and moving into a larger facility, and Davenport wants to expand the company’s outreach to new workers. “We’re trying to be on the cutting edge, and do new things and keep the job exciting,” he said. “It’s a great career, and you don’t have to spend $300,000 to go to school for it.”

Playing basketball, tennis or any other sport on concrete is becoming less and less common these days, thanks to the plastics industry. One innovative company, CH3 makes a product called VersaCourt that’s begun to replace harder athletic surfaces with a softer plastic material. CH3 provides the courts with a lifetime warranty and it’s designed to go in right on top of an existing court, saving a great deal on installation for any venue or municipality that might want to upgrade their recreational courts. “With concrete, they usually have to replace them, or repaint them or the surface will crack over time,” said Rodney Davenport of CH3. “Our product goes over the concrete, gives it a look and you can paint it with any color or add any custom logos to it.” Not only does it perform as well as its concrete counterpart; it’s easier to repair, easier to clean or replace and easier to play on. Since the material that goes into the tiles is softer than concrete, it creates a great deal less strain on players’ knees, ensuring that they can keep playing for much longer with less of a risk of injury.

VERSACOURTS ARE MADE OF SOFTER PLASTIC MATERIAL.

Now CH3 is growing, and moving into a larger facility, and Davenport wants to expand the company’s outreach to new workers. “We’re trying to be on the cutting edge, and do new things and keep the job exciting,” he said. “It’s a great career, and you don’t have to spend $300,000 to go to school for it.” The Fall 2016 Edition of the SPI Magazine, published by SPI: The Plastics Industry Trade Association.

The Fall 2016 Edition of the SPI Magazine, published by SPI: The Plastics Industry Trade Association.