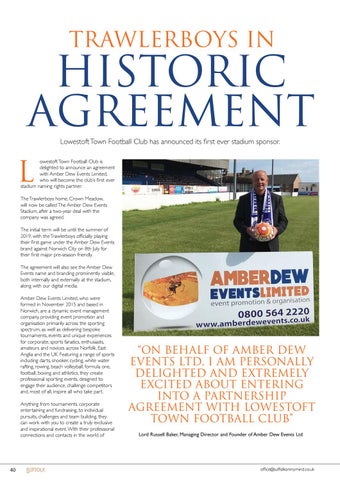 owestoft Town Football Club is delighted to announce an agreement with Amber Dew Events Limited, who will become the club’s first ever stadium naming rights partner. The Trawlerboys home, Crown Meadow, will now be called The Amber Dew Events Stadium, after a two-year deal with the company was agreed. The initial term will be until the summer of 2019, with the Trawlerboys officially playing their first game under the Amber Dew Events brand against Norwich City on 8th July for their first major pre-season friendly. The agreement will also see the Amber Dew Events name and branding prominently visible, both internally and externally at the stadium, along with our digital media. Amber Dew Events Limited, who were formed in November 2015 and based in Norwich, are a dynamic event management company, providing event promotion and organisation primarily across the sporting spectrum, as well as delivering bespoke tournaments, events and unique experiences for corporate, sports fanatics, enthusiasts, amateurs and novices across Norfolk, East Anglia and the UK. Featuring a range of sports including darts, snooker, cycling, white water rafting, rowing, beach volleyball, formula one, football, boxing and athletics, they create professional sporting events, designed to engage their audience, challenge competitors and, most of all, inspire all who take part. Anything from tournaments, corporate entertaining and fundraising, to individual pursuits, challenges and team building, they can work with you to create a truly exclusive and inspirational event. With their professional connections and contacts in the world of

The 2017 Summer Edition on Suffolk on My Mind Magazine which covers Suffolk and in particular the wonderful town of Bury St Edmunds. 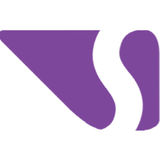