No Easter Eggs for Black Farmers 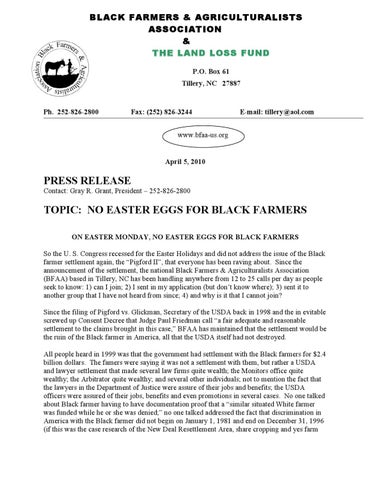 TOPIC: NO EASTER EGGS FOR BLACK FARMERS ON EASTER MONDAY, NO EASTER EGGS FOR BLACK FARMERS So the U. S. Congress recessed for the Easter Holidays and did not address the issue of the Black farmer settlement again, the “Pigford II”, that everyone has been raving about. Since the announcement of the settlement, the national Black Farmers &amp; Agriculturalists Association (BFAA) based in Tillery, NC has been handling anywhere from 12 to 25 calls per day as people seek to know: 1) can I join; 2) I sent in my application (but don’t know where); 3) sent it to another group that I have not heard from since; 4) and why is it that I cannot join? Since the filing of Pigford vs. Glickman, Secretary of the USDA back in 1998 and the in evitable screwed up Consent Decree that Judge Paul Friedman call “a fair adequate and reasonable settlement to the claims brought in this case,” BFAA has maintained that the settlement would be the ruin of the Black farmer in America, all that the USDA itself had not destroyed. All people heard in 1999 was that the government had settlement with the Black farmers for $2.4 billion dollars. The famers were saying it was not a settlement with them, but rather a USDA and lawyer settlement that made several law firms quite wealth; the Monitors office quite wealthy; the Arbitrator quite wealthy; and several other individuals; not to mention the fact that the lawyers in the Department of Justice were assure of their jobs and benefits; the USDA officers were assured of their jobs, benefits and even promotions in several cases. No one talked about Black farmer having to have documentation proof that a “similar situated White farmer was funded while he or she was denied;” no one talked addressed the fact that discrimination in America with the Black farmer did not begin on January 1, 1981 and end on December 31, 1996 (if this was the case research of the New Deal Resettlement Area, share cropping and yes farm

slavery would show otherwise); no one spoke of the tremendous loss of land and the economic assets families lost; no one discussed the fact that Black farm families were being put off the land and out of their homes with no recourses or recourse; no one talked about the Black farmers being reported to the Internal Revenue Services (IRS) for debt write off and cash settlement amounts which were primarily “daily compounded interest rates” imposed by the USDA and yet, Black farmers were to pay taxes on such. Oh, no! No one wanted to talk about any such atrocities, and that the USDA and DOJ had devised a scheme that would surely out wait the majority of the Black farmers whose lives had been ruined by government sanctioned discrimination and racism. There was no call by then President Bill Clinton for a rapid response to settle the cases. There was no outcry from the banking community as to what they would lose (nothing- - they were getting our land). There was no national outcry that here is a group of people who have truly been done wrong by the government and now the Federal Court says their pain and suffering is worth only $50 thousand dollars. I am so happy that BFFA has continued to hold Black Land Loss Summits to continue to bring awareness to the “inheritance lost” by the decedents of these noble Americans; that we have continued to be there (without fee) to help and explain the process and the pitfalls to those seeking what was rightfully theirs in the Pigford Class. And let us not forget the bravery of the NC Black Lawyers’ Land Loss Prevention Project (LLPP), Durham, NC that saved many a NC Black farmer. Let us not forget the long and tedious march of the Federation of Southern Cooperatives/Land Assistance Fund, Atlanta, GA. And yes, we cannot forget the work that John Boyd has done publicly to bring Pigford II to some kind of fruition, while so many other organizations’ work has gone unnoticed by the media. Anyone who understands our system of government knows full well that one person cannot get a law changed or passed or appropriations designated. Not to daunt or negate the efforts of Mr. Boyd, president of the National Black Farmers Association, but even with the workings of the Network of Black Farm Groups: Arkansas Land and Farm Development, Black Farmers and Agriculturalists Association, Federation of Southern Cooperatives/Land Assistance Fund, Mississippi Family Farmers Association, Land Loss Prevention Project, Oklahoma Black Historical Research Project, Rural Advancement Fund, United Farmers-USA, and the Texas Landowners Association, the word &quot;black&quot; seems to still have more power in preventing the congress to act than encouraging them to right such an injustice. Thus, the crucifixion of the Black farmer continues, but no Easter Eggs for them. Again there has been no outrage by the Black community or any other group, that a group of people have been put out of business and their homes during the “prosperity years” of the U.S. economy. But just let the government announce that “We have reached a settlement with the Black farmers in the amount of $1.25 billion” and the world thinks that everything is ok. Black people in this country still have NOT arrived, even though Barack Obama sits in the Oval Office in the White House. The largest Civil Rights Settlement in the history of the country has contributed to the decline in health (so called “health disparities”) and a higher death rate among Blacks than any other settlement in the history of this country. The government’s attitude is basically, “we will wait them out.” And wait them out they have. When the researchers finally show the decline of Black farmers from 1998 (time of the original Pigford settlement) until the present; when researchers show the death rate in the black farming

community and decline in health, displaced families, increased need for government programs like food stamps within the Black farming community, the nation will be shocked. These same researchers will also show the growth in the size and income of the White family farmer, especially in the South. The will show the increased ownership of land within the Black community by corporate agribusiness farms that continue to cause environmental problems that lead to again “health disparities” that plague Black communities and other people of color all across rural America. And still a nation is not out raged. So, it is not surprising to the BFAA that Congress adjourned on March 26, 2010 to take a two week vacation immediately after passing a much long overdue health reform bill without passing legislation that would assure Black farmers that the Pigford Class would be settled “once and for all.” Whenever Black people are the central focus in this country, there is no need to rush anything into action for they are “the most patient and forgiving people in the nation,” stated Matthew Grant who died in 2001 after a 25 year struggle to save his family farm in the New Deal Tillery Resettlement Farms district. He also said, “The government is taking away the legacy and inheritance for our children.” Where is the outrage Black America that the economic system that sustained us through landownership and feeding the community will soon be completely gone? Where is Tavis Smiley, Jessie Jackson, Minister Farrakhan, Al Sharpton, Tom Joyner, Michael Baisdren and all the others who profess to seek “justice” for the Black community? Until WE as a people stop swallowing hook, line and sinker, all the BS that is dished out by aging white men saying that things are getting better and that integration has been successful, we will continue to lose our base of economic security within the Black community while all other ethnicities look out for their own through unification and standing in a united front. African Americans should cease from being ashamed of our history, for the Black struggle in America IS AMERICA’S HISTORY. We cannot allow a government that is filled with racist laws and policies to continue to deprive us of our Constitutional Rights. For now, the solution is simple. Give us our land back, immediately with no strings attached! This is and was what the Black farmers went to Washington for in 1998. Join us in insisting that our leaders do what is right.

No Easter Eggs for Black Farmers