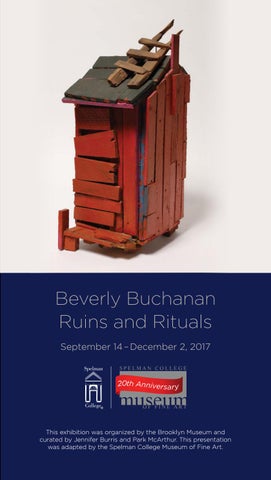 This exhibition was organized by the Brooklyn Museum and curated by Jennifer Burris and Park McArthur. This presentation was adapted by the Spelman College Museum of Fine Art. #SpelMuse20 #BeYourOwnMuse #RuinsandRituals

The Spelman College Museum of Fine Art is proud to launch its 2017–2018 season with Beverly Buchanan—Ruins and Rituals, the most comprehensive exhibition of Beverly Buchanan’s work to date. Through incisive considerations of site, history, biography, and portraiture, Beverly Buchanan (1940–2015) produced landmark bodies of work that explored the relationship between memory— personal, historical, and geographical—and place. Engaging with movements such as Post-Minimalism, Land Art, and Feminism, she delved into themes of memory and historical injustice, monument and ruin, and southern vernacular architecture. Beverly Buchanan—Ruins and Rituals brings her memorials, burial sites, archives, and shack sculptures for which she is most known into a critical context for the first time. The exhibition underscores how her work questions the methods and effects of history and also asks who is commemorated and how. It also highlights how Buchanan’s practice was informed by the histories of the locations where she lived and worked, including New York, Georgia, and Florida. Beverly Buchanan—Ruins and Rituals features sculpture, painting, photography, drawing, notebooks of the artist’s writings, and documentation of private performances that linked political and social consciousness to the formal aesthetics of abstraction. Site-specific work is represented in dialogue with the architectural and archaeological sculptures alongside a range of archival materials, works on paper, and three-dimensional objects that all grew out of the artist’s early interest in the materials, colors, and underlying histories of specific places. #SpelMuse20 #BeYourOwnMuse #RuinsandRituals

Buchananâ&amp;#x20AC;&amp;#x2122;s practice moved fluidly between research materials and finished artwork, and between private reflection and outspoken political critique. She was a charismatic and visible member of the 1970s and 80s New York art scene. Living in the south and away from urban art centers for the majority of her career, she produced a rich body of sculpture, environmental art, and photographs. However, she is largely undersung and rarely discussed in the context of her contemporaries. Buchanan had significant romantic relationships with women, but never publicly discussed her sexuality. Instead, she opted to reject additional labels that would allow others to define her. While this exhibition explores her dialogue with a range of styles, materials, and movements, as well as with gender, race, and class, it also emphasizes how Buchanan and her work resist easy categorization. Beverly Buchananâ&amp;#x20AC;&amp;#x201D;Ruins and Rituals was organized by the Brooklyn Museum and curated by Jennifer Burris and Park McArthur. This presentation was adapted by the Spelman College Museum of Fine Art and includes important works from several Georgia collections.

Beverly Buchanan Born in Fuquay-Varina, North Carolina, in 1940, Beverly Buchanan was adopted by her great-aunt and great-uncle Marion and Walter Buchanan and raised in Orangeburg, South Carolina. Growing up, she often accompanied Walter Buchanan who was Dean of the School of Agriculture at South Carolina State College as he visited tenant farmers across the state. She became fascinated with the inventive homemade architecture, the environment, and the people she encountered. Although she liked to draw, in 1958 she entered Bennett College in Greensboro, North Carolina, where she studied science and medicine. There, she became an activist and participated in student protests. She later attended Columbia University in New York, earning masterâ&amp;#x20AC;&amp;#x2122;s degrees in parasitology and public health in 1968 and 1969 respectively. As Buchanan worked as a public health educator in New Jersey and prepared to go to medical school, she began to reconsider her chosen career path and acknowledge her longing to be an artist. She enrolled in a class taught by acclaimed artist Norman Lewis at the Art Students League in 1971 and was encouraged by Lewis and Romare Bearden, who became friends and mentors. Buchananâ&amp;#x20AC;&amp;#x2122;s early works, which were abstract paintings and cast-concrete sculptures, were quickly included in important group exhibitions in New York. In 1977, after living in New York and New Jersey for more than a decade, Buchanan decided to pursue art exclusively and moved to Macon, Georgia. In addition to creating several site-specific earthworks, she began depicting shacks and vernacular architecture, the work for which she is best known. In 2003, after living in several cities in Georgia including Atlanta and Athens, she left the Southeast and moved to Ann Arbor, Michigan where she died in 2015 at the age of 74.

Programming OPENING RECEPTION AND CURATORS’ LECTURE Thursday, September 21, 2017 | 6:30 p.m. Be among the first to view Beverly Buchanan—Ruins and Rituals and attend a lecture by exhibition curators Jennifer Burris and Park McArthur.

COMMUNITY CONVERSATIONS Community Conversations invites artists, Atlanta University Center faculty, staff, and students, and other Friends of the Museum to connect their interests to the works of art on view in the Museum’s current exhibition. MOVING OUR STORIES: THE EMBODIED MEMORY OF RUINS, ERASURE, AND SURVIVAL Wednesday, October 4, 2017 | 3:00 p.m. Julie B. Johnson, Ph.D., Lecturer Of Contemporary Dance Moving Our Stories is an interactive movement conversation that explores embodied memory, histories, and narratives. All are welcome as we examine the concept of ruins as remnants of the past that linger in the body, inform our movement, and serve as testaments of survival and resilience.

MUSEUM DAY PARTY Friday, October 20, 2017 | 3:00 p.m – 5:00 p.m. Celebrate Homecoming and join alumni from Spelman College and Morehouse College for the annual Museum Day Party. Guests are also invited to take interactive tours of the Museum of Fine Art’s current exhibition Beverly Buchanan—Ruins and Rituals. There will be music, fun, and so much more. This program is organized in collaboration with the Spelman College Office of Alumnae Affairs.

BLACK BOX BLACK BOX is a site for play, dialogue, and creative risk taking where an artist shares an in-progress work in front of an audience for feedback, engagement, and encouragement. It also provides a space for arts enthusiasts to view compelling work from some of the most exciting and thought-provoking artists working today. Each BLACK BOX focuses on the art and culture of the African Diaspora. YABA BLAY, PH.D. PROFESSIONAL BLACK GIRL Tuesday, October 17, 2017 | 6:30 p.m. Camille Olivia Hanks Cosby, Ed.D. Academic Center Auditorium Professional Black Girl is an original video series and online social movement created to celebrate everyday, round-the-way Black Girl Magic, because yes, round-the-way girls got magic too! Creator, producer, and Professional Black Girl, Yaba Blay, will present and discuss her vision to grow and expand the movement’s reach and impact. We are master code-switchers. We hold Ph.Ds and listen to trap music. We twerk and we work.

THERE IS NO MAP: YOU MAKE IT UP AS YOU GO ALONG Wednesday, November 8, 2017 | 6:30 p.m.* Camille Olivia Hanks Cosby, Ed.D. Academic Center Auditorium Using Beverly Buchanan’s life and words as inspiration and remixing the traditional artist talk, citizen artist vanessa german uses movement, poetry, music, monologue, and art making to explore the anatomy of the human spirit that dares to make its own way. *The Museum will open at 6:00 p.m. for opportunities to view Beverly Buchanan— Ruins and Rituals and participate in a collaborative performance with the artist.

CULTIVATE YOU: THE RITUAL OF FINDING AND CREATING HOME* Sunday, November 19, 2017 | 12:00 p.m. – 5:00 p.m. Join us for a micro-retreat focused on creating an at home wellness practice wherever you are. Guided by Rachelle Knowles, participants will use movement (yoga) and other meditative practices as a way to connect with their bodies and acknowledge the healing powers of their breath. Rachelle Knowles is a certified yoga instructor and founder of Cultivate Union, a 501(c)3 organization committed to deepening the impact of yoga and meditation in Atlanta. Space is limited to 20 people. Please call 404.270.5607 or email museum@spelman.edu to register. *Individuals with any injuries should participate with caution.

Be Your Own Muse is a podcast series that highlights Black women cultural producers. Since launching in September 2016, the Museum has featured celebrated artists, arts advocates, and curators, including Mickalene Thomas, Jalylah Burrell, Erika Dalya Massaquoi, Ph.D., and others. Our upcoming recordings will contribute to the growing archive of information about Beverly Buchanan, her work, connection to Atlanta, and meaningful contribution to the art world. Guided Tours The Spelman College Museum of Fine Art provides guided tours of all of our exhibitions free of charge. To schedule a tour, email museum@spelman.edu with Guided Tour in the subject line. All programs are free and located in the Museum unless otherwise noted. Please contact us at 404.270.5607, museum@spelman.edu, or @spelmanmuseum on Twitter with questions about any of the above programs and for more information.

In the Garden, the Artist at Home 1993 Oil and pastel on paper with Xerox copies 44.5 x 30 inches Collection of Spelman College Gift of Lucinda and Robert Bunnen

This exhibition is made possible by

MISSION To inspire and enrich the lives of the Spelman College community and the general public primarily through art by women of the African Diaspora.

BECOME A FRIEND The Spelman College Museum of Fine Art relies on the generosity of Friends and Patrons. By joining this unique cultural institution, you will support the Museumâ&amp;#x20AC;&amp;#x2122;s new acquisitions, special exhibitions, related programs, exclusive events, and outreach programs. Visit museum.spelman.edu to join today.

The Museum is increasingly using the web, email, and social media to connect with visitors and Friends. For advance notice about upcoming exhibition-related programs, subscribe to the Museum at museum.spelman.edu, follow the Museum on Facebook at facebook.com/spelmanmuseum, on Twitter at twitter.com/spelmanmuseum and on Instagram at instagram.com/spelmanmuseum.

SUBSCRIBE TODAY The Museum is printing and mailing less frequently and, therefore, saving resources and reducing its impact on the environment. Instead, it is increasingly communicating with its growing community online. Subscribe to our newsletter and join the conversations at museum.spelman.edu.

Beverly Buchanan (1940–2015) produced landmark bodies of work, including cast concrete and mixed media sculptures, drawings and books, and evocative paintings and photographs. The artist explored themes of memory and historical injustice, monument and ruin, and the forms of southern vernacular architecture. Beverly Buchanan—Ruins and Rituals is the most comprehensive exhibition of Buchanan’s work to date. Beverly Buchanan—Ruins and Rituals was organized by the Brooklyn Museum and curated by Jennifer Burris and Park McArthur. This presentation was adapted by the Spelman College Museum of Fine Art.