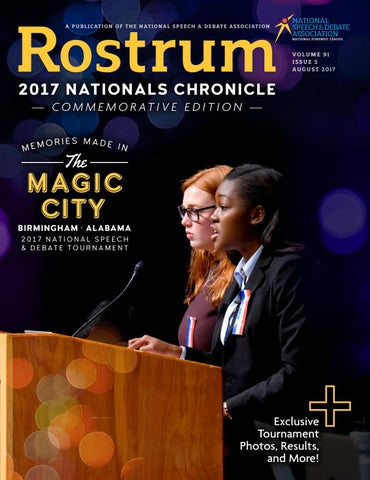 A PUBLICATION OF THE NATIONAL SPEECH & DEBATE ASSOCIATION

EARN THOUSANDS OF DOLLARS FOR YOUR CLASSROOM OR TEAM!

APPLY TODAY! SUPPORTED BY THE

The NSDA has more than $500,000 to award to schools that hold Big Questions events.

Debates can be held as tournaments, scrimmages or classroom events.

Simple to execute: all you need is 15 students to do three rounds.

FREE resources and tournament support provided by the NSDA to make your event successful.

A new and exciting way to raise funds for your team and get more students involved in debate!

RESOLVED: Humans are fundamentally different from other animals.

OUR MISSION Rostrum shares best practices, resources, and opportunities that connect, support, and inspire a diverse community of speech and debate educators committed to giving youth a voice.

This past June, the 2017 National Speech & Debate Tournament took us to Birmingham, Alabama, where we witnessed the incredible talents of our student competitors. In this special issue of Rostrum, we recap the highlights of the week and celebrate our award winners.

Each year, the National Tournament serves as a powerful reminder of why speech and debate education is so important. Our student competitors use their voices to share their stories, take a stand, and advocate for change. We honor our student finalists for their amazing achievements beginning on page 16. Whether you joined us in person, watched the livestream coverage, or are just flipping through this magazine, I hope you pause to take in the amount of time and effort the coaches and students in these pages have dedicated to this activity. Qualifying for the National Tournament is an outstanding accomplishment, and for many students it is a highlight of their high school career. To qualify once is remarkable. To qualify four times is phenomenal. Don’t miss our Four-Time National Qualifiers on page 14. We owe much of the week’s success to the hard work and southern hospitality of our local hosts, led by Board Member Jay Rye. I wish to congratulate the entire host committee on a job well done. Meet this fantastic group on page 32. Most importantly, this week would not be possible without the tireless work of the coaches, chaperones, and tournament officials who put in long hours to bring this opportunity to students. Thank you to all those who made sacrifices to allow these students to stand up among the best of the best and have their voices heard. We’re already looking forward to #Nats18 in Fort Lauderdale, Florida. I hope to see you there! Sincerely, J. Scott Wunn Executive Director National Speech & Debate Association

A PUBLICATION OF THE NATIONAL SPEECH & DEBATE ASSOCIATION

(USPS 471-180) (ISSN 1073-5526) Rostrum is published five times per year (Sept., Nov., Feb., Apr., and Aug.) by the National Speech & Debate Association (NSDA), 401 Railroad Place, West Des Moines, IA 50265-4730. Periodical postage paid at Ripon, WI 54971. POSTMASTER: Please send address changes to NSDA, 401 Railroad Place, West Des Moines, IA 50265-4730. Rostrum provides a forum for the speech and debate community. The opinions expressed by contributors are their own and not necessarily the opinions of the NSDA, its officers, or its members. The National Speech & Debate Association does not guarantee advertised products and services unless sold directly by the NSDA.

Our generous sponsors make the National Tournament possible! Thank you for showing your commitment to fostering excellence in young people through competitive speech and debate activities.

At the 2017 District Leadership Luncheon

to David Abel from the Sunflower District

of Kansas. Other district chairs from

from the UIL District of Texas received

across the country received Gold, Silver,

the Chair of the Year award. Martha

and Bronze Awards for their outstanding

Benham from the Colorado District was

Crawford Leavoy from the Tarheel East

and the North Dakota Roughriders District

Tournament Registration and Expo Students toured the National Tournament Expo on Sunday as coaches picked up their team’s registration materials. Attendees shopped the Speech & Debate Store, visited with representatives from colleges and universities, and took photos in front of the “Words Matter” backdrop. The NSDA also hosted conversations about issues of inclusion in the speech and debate community at the African American/Black, Hispanic/Latinx, LGBT+, and Womxn and Gender Non-conforming Coaches’ Caucuses.

TUESDAY Re-registration and Student Posting Party Tournament attendees gathered at the Uptown District in downtown Birmingham for an evening of food, fun, and entertainmentâ&#x20AC;&#x201D;and of course, tournament results on the big banners! The student party featured a DJ, food trucks, inflatable yard games, and some serious dance contests! Those who did not advance re-registered in The Westin Hotel to compete in supplemental events on Wednesday.

WEDNESDAY High School Main Event Semifinals and Supplemental Events â&#x20AC;˘ Middle School Competition Wednesday signaled the start of the Middle School National Speech & Debate Tournament. Many high school juniors and seniors decided to give back by judging their middle school peers. Other high school students continued on in their chosen supplemental event: Commentary, Expository, Extemporaneous Debate, Poetry Reading, or Prose Reading. With final rounds in sight, speech semifinalists gave it their all Wednesday afternoon, pledging to leave nothing on the table, to see who among them would make it to the big stage!

Thousands of spectators filled the BJCC

events continued throughout the day

World Schools Debate and the various

on Thursday, as did main event debate

competition. The National Congress held its

and evening. New and veteran coaches

final sessions, followed by the Congressional

and educators were recognized for

Banquet in the Sheraton Birmingham Hotel,

excellence in speech and debate activities

where student Senators and Representatives

during the Donus D. Roberts Diamond

were recognized for their hard work

Audiences were informed and persuaded

made possible by the NSDA’s generous

as talented speakers and debaters forged

tournament sponsors. Rounding out the

their strongest cases for being named

the best in the nation! Final rounds of

often referred to as “the Oscars” of our

and intensity of the tournament as

the day as students competed for

students were recognized and rewarded

for their phenomenal accomplishments.

Dreyfoos School Of The Arts

presented by the Stennis Center for Public Service Leadership

presented by the Stennis Center for Public Service Leadership

The Circle of Champions represents the best of the best in our activity. Join us in congratulating our 2017 national champions!

The National Speech & Debate Tournament marks the capstone of speech and debate activities for more than 150,000 members across the country. To attend, students must qualify at one of the Association’s 110 district tournaments or through one of our seven international qualifying programs. The National Debate & Speech Tournament has been held across the country since 1931, and today is the largest academic competition in the world. Each year, more than 3,500 high school students compete in a weeklong competition to determine the most prestigious title in high school academics: national champion.

The 18th annual Middle School National Speech & Debate Tournament was held June 20-23 in Birmingham, Alabama. A total of 670 students from 157 schools across the country competed at the event!

presented by the Council on Foreign Relations

Coached by Scott Voss and

presented by The Interp Store

presented by the John Templeton Foundation

Coached by Robert A. Sorensen

Awarded to the team that has placed the highest, cumulatively, at five great national debate tournaments

Bruno E. Jacob/Pi Kappa Delta Trophy Presented annually to the high school that has accumulated the greatest number of main event rounds at the National Tournament

Champion coaches received a commemorative plaque in the shape of the state of Alabama. (above, left to right)

Middle School Coach of the Year

High School Principal of the Year

Middle School Principal of the Year

Communicator of the Year

Dreyfoos School Of The Arts, FL

Schools of Excellence in Debate

Schools of Excellence in Speech