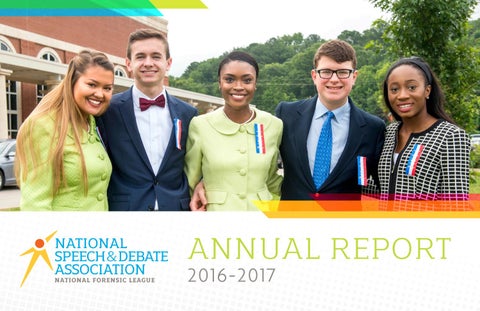 FROM THE EXECUTIVE DIRECTOR Thank you! You make speech and debate happen. You gave students online workshops, scholarships, and awards. You invested in curricula, professional development opportunities, tournament logistics, and other materials to support coaches. But this year, you went above and beyond and connected our vast network of alumni and supporters to make National Speech and Debate Education Day a big success! In 2017, more than 30 states, cities, and school boards passed resolutions officially declaring March 3 the day to celebrate the importance of speech and debate education. I look forward to celebrating you and speech and debate again this year on March 2, 2018, with our next National Speech and Debate Education Day! Sincerely,

As a coach and educator, I like Big Questions Debate because it allows students to discuss big philosophical ideas in a format that all levels of students can attempt. In a time where teachers are constantly told to increase the rigor and broaden the curriculum, this style of debate offers — Jeff Stutzman, Concord High School Coach Elkhart, Indiana

debaters and teachers an opportunity to do both.

students, and alumni on National Speech and Debate Education Day. Yvanna is the first Latina state senator in Nevada and an NSDA alum.

I think the best thing about debate is that it

Alumni across the world proudly celebrated March 3, 2017. In addition to the U.S. Senate resolution, Nevada was one of more than 30 state, city, and local governments that passed a resolution declaring National Speech and Debate Education Day! Leading the charge for the Nevada resolution was NSDA alum and state senator Yvanna Cancela.

forces you to listen, whether or not you agree with the other side. The same should be done in the political world. We should be listening a lot more, not just to craft our answers, but to truly listen and engage. There are valid ideas on both sides, and when we have respectful but tough — Yvanna Cancela, Nevada State Senator Carrollton School of The Sacred Heart, Alum 6

Face-to-face with constituents, or speaking to them on the phone, Yvanna uses the skills she learned in high school debate every day. &quot;Debaters are equipped with the research and advocacy tools that are needed now more than ever.&quot;

Last night I was made aware that I would be the first African American female debater on the PF final stage. If there is anything I would want people to learn from this [final] round, it is to let every minority in PF know that this is possible, and that my experience will be used as a stepping stone for the empowerment of youth of color in this activity.

Cornelia Fraser and Rafey Khan (who Cornelia describes as her best friend from Nova High School in Florida) were crowned national champions in front of a physical audience of 2,800 and an online audience of 6,500 through the livestream. For weeks and months after that night, Cornelia received messages from debaters, coaches, parents, and community members who told her the impact this historic moment had on their lives. An aspiring civil rights attorney, Cornelia knows debate will help her succeed. “It taught me how to think logically about arguments and refutations on the fly, while also making me learn how to read my audience.” 8

In Memory of Carl Grecco

In Honor of Gay Brasher, Pam and Joe Wycoff, Steven Kirk Schappaugh and In Memory of Mr. David T. Horn

In Memory of B.J. and Lanny Naegelin

Steven and Anna Schappaugh St. Andrew&#39;s Episcopal School In Honor of Jade Lewis and In Memory of Perry Tyner Tate

In Honor of Robin Gloss