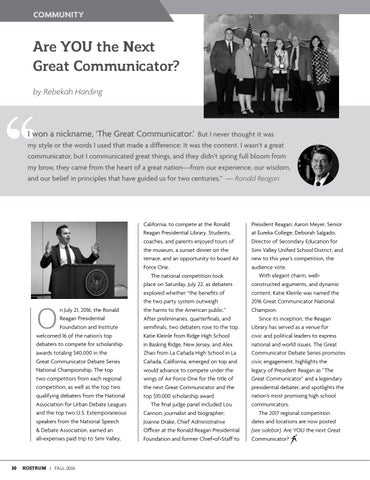 Are YOU the Next Great Communicator?

I won a nickname, ‘The Great Communicator.’ But I never thought it was

my style or the words I used that made a difference: It was the content. I wasn’t a great communicator, but I communicated great things, and they didn’t spring full bloom from my brow, they came from the heart of a great nation—from our experience, our wisdom, and our belief in principles that have guided us for two centuries.” — Ronald Reagan

n July 21, 2016, the Ronald Reagan Presidential Foundation and Institute welcomed 16 of the nation’s top debaters to compete for scholarship awards totaling $40,000 in the Great Communicator Debate Series National Championship. The top two competitors from each regional competition, as well as the top two qualifying debaters from the National Association for Urban Debate Leagues and the top two U.S. Extemporaneous speakers from the National Speech &amp; Debate Association, earned an all-expenses paid trip to Simi Valley,

California, to compete at the Ronald Reagan Presidential Library. Students, coaches, and parents enjoyed tours of the museum, a sunset dinner on the terrace, and an opportunity to board Air Force One. The national competition took place on Saturday, July 22, as debaters explored whether “the benefits of the two party system outweigh the harms to the American public.” After preliminaries, quarterfinals, and semifinals, two debaters rose to the top. Katie Kleinle from Ridge High School in Basking Ridge, New Jersey, and Alex Zhao from La Cañada High School in La Cañada, California, emerged on top and would advance to compete under the wings of Air Force One for the title of the next Great Communicator and the top $10,000 scholarship award. The final judge panel included Lou Cannon, journalist and biographer; Joanne Drake, Chief Administrative Officer at the Ronald Reagan Presidential Foundation and former Chief-of-Staff to

President Reagan; Aaron Meyer, Senior at Eureka College; Deborah Salgado, Director of Secondary Education for Simi Valley Unified School District; and new to this year’s competition, the audience vote. With elegant charm, wellconstructed arguments, and dynamic content, Katie Kleinle was named the 2016 Great Communicator National Champion. Since its inception, the Reagan Library has served as a venue for civic and political leaders to express national and world issues. The Great Communicator Debate Series promotes civic engagement, highlights the legacy of President Reagan as “The Great Communicator” and a legendary presidential debater, and spotlights the nation’s most promising high school communicators. The 2017 regional competition dates and locations are now posted (see sidebar). Are YOU the next Great Communicator?