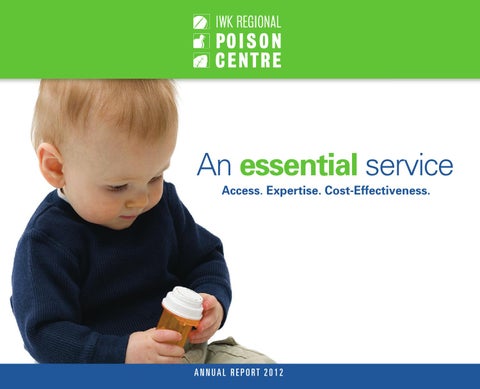 Who we help. The Public Every day in the Maritimes, more than 20 people per day in 2012 were exposed to a potentially toxic medicine or poison. The Poison Centre can quickly determine whether medical attention is required. Calling the Poison Centre can avoid unnecessary visits to a doctor.

Partners in Health Care The Poison Centre collaborates with 911, HealthLink 811, Public Health, Emergency Health Services and industry partners to ensure the highest level of prevention and treatment of anyone with a potentially toxic exposure.

A message from the Medical Director The year 2012 was a busy one for poison centres everywhere, particularly North America. There continued to be a significant epidemic of prescription drug misuse, which we observed in our own data in Nova Scotia and Prince Edward Island. Our own poison centre was the first in Canada to handle a case of bath salt intoxication, a new group of stimulant drugs which cause severe medical effects. Even household products made the news this year, with laundry pods causing unexpectedly severe effects in children who were accidentally exposed.

All of these issues have been in the media, with poison centres showing leadership in achieving increased awareness in the public and health care settings.

Poison centres are typically small centres with a relatively small staff covering a large geographic area. Despite their small size, poison centres provide a critically important resource to both the public and health care providers, with 24/7 telephone access to expertise in an area of medicine that is not well known to most clinicians. And they are cost effective, too: an independent report in the US this year demonstrated an overwhelming return on investment of $13 USD for every dollar invested in poison centres. In a time of economic challenges, especially in health care, we are pleased to be part of the solution.

demonstrated an overwhelming return on investment of $13 USD for every dollar invested in poison centres.

Poison Centre background The IWK Regional Poison Centre is located in Halifax at the IWK Health Centre, the primary care centre for the regionâ&#x20AC;&#x2122;s children, women and youth. It started out, as many centres did, in the 1950â&#x20AC;&#x2122;s as a single red phone in the Pediatric Emergency Department that was answered by a nurse or resident. The Poison Centre expanded to full 24-hour coverage in 1991, and in the same year entered into a contract to provide service to Prince Edward Island.

The Poison Centre provides up-to-date, accurate poison information and toxicologic consultation to both the public and health care providers. With almost 10,000 calls received per year, staff members have extensive training and experience in toxicology and poisons. In addition, the centre houses a multitude of resources including databases, texts, and journals, with direct access to major online medical libraries.

is the only resource

to ensure that optimal individualized care is

and research are ongoing Poison Centre

provided in the event of a real or potential

changes in the public and private industry

and physicians serve the public and health

sectors in areas related to poisonings and

in the Atlantic provinces for this area of medicine.

Edward Island with a 24 hour/seven day a week telephone service that provides access to expert clinical advice aimed at limiting or preventing injury due to drugs or poisons.

Research-based evidence conclusively shows that significant cost savings to the health system can be realized by creating and enhancing direct linkages between poison centres and 911 emergency reporting services. Since 2000, the IWK Regional Poison Centre and the Nova Scotia Emergency Management Office (EMO), the provincial entity responsible for 911 services, have been working in collaboration to provide timely emergency service for poison related incidents. Approximately 80 percent of poison related calls that are reported to a poison

areas where health care resources may be limited.

Currently, the IWK Regional Poison Centre has a dedicated phone line for 911 calls.

This organization is a Maritime-wide childrenâ&#x20AC;&#x2122;s injury prevention program at the IWK. Collaboration with the Poison Centre for initiatives such as poisoning prevention, can help reduce the incidence and severity of injury to children and youth.

In addition to pharmaceuticals and household chemicals, poisons can be found in plants, contaminated food, and the workplace. Fostering collaborative relationships with agencies in the community and government is important to identify potential hazards and prevent injury.

Access Collaboration with HealthLink 811 is a health information line for Nova Scotia, and in September 2013, for Prince Edward Island as well. The RPC worked as a partner in the development of the service. This involved planning sessions, review of guidelines & protocols related to poisonings, and the provision of education sessions to the HealthLink 811 team.

811 In 2012, over 1500 calls were transferred directly from HealthLink 811 to the RPC via a dedicated phone line. These calls involved therapeutic medication errors, drug information, and poisoning calls.

The largest number of medication error calls to the IWK

Our Services • Participation in ongoing care of the poisoned patient via follow-up calls to assess the effectiveness of recommendations and ensure optimal patient care. • Collaboration with other health-care professionals to advocate for optimal, current and evidence-based care of the poisoned patient. • Collaboration with 911, Public Health, Healthlink 811, EHS, and industry partners.

Having the right antidotes in the right place is crucial: knowing how to administer the antidotes is just as important. The IWK Regional Poison Centre has developed clear and concise online guidelines to assist the health care provider in giving timely and life saving antidotes.

Pharmaceutical drug shortages continue to be a major concern within health care. When critical shortages of essential antidotes such as Fomepizole速 and DigiFab速 occurred in the last two years, the existing infra-structure of the Provincial Antidote Kit Program provided invaluable oversight of antidote stock availability in NS & PEI.

Expertise We are a highly-trained and motivated team that provides expert poisoning consultation. Dr. Nancy Murphy is the only American Board Certified Medical Toxicologist in Atlantic Canada. The five other medical consultants for the poison centre are skilled and experienced emergency physicians with a special interest in toxicology. There is 24/7 physician on call coverage for the poison centre, allowing consistent access to toxicologic expertise.

Expertise Public awareness “Bath Salts” The number of calls In the spring of 2012, there was a surge of calls made to the Poison Centre by NS hospitals regarding “Bath Salts” exposures.

Bath Salts are synthetic compounds that have stimulant and hallucinogenic properties, much like amphetamines. The US media had been reporting cases of extreme agitation and bizarre behaviour due to these street drugs; the IWK RPC was the first Canadian poison centre to receive calls about these compounds. The use of bath salts has been associated with heart and nervous system problems, as well as aggressive & psychotic behavior that can lead to harm for both the patient and health care providers.

The RPC responded to this occurrence with the development of a document containing pertinent information about bath salts and was circulated to all emergency departments and to Emergency Health Services throughout the province in an effort to both provide background information about these new drugs and offer specific treatment recommendations. Dr Nancy Murphy was interviewed several times by the media regarding this topic. Raising awareness about bath salts in the public forum brought the subject to the attention of Health Canada. In June 2012, Health Canada announced its intention to regulate the most common type of bath salt called MDPV, and in September 2012 announced the successful regulation of MDPV as illegal to possess, traffic, import or export.

Expertise Current trends in poisoning Laundry detergent packets or pods Laundry detergent pods are single-use packets that are designed to dissolve when moisture hits them in the washing machine. They are bright and colourful, and are squishy to touch, often attracting young children to play with them.

Opioids Between 2007 and 2012, calls to the RPC regarding opioids (narcotics) increased by 60%. Increasing adult drug prescriptions are strongly associated with rising pediatric exposures and poisonings, particularly for opioids and among children 0 to 5 years old. These associations have sizable impacts, including high rates of serious injury and health care use. Burghart LC et al. Adult Prescription Drug Use and Pediatric Medication Exposures and Poisonings. Pediatrics 2013;132:1â&#x20AC;&#x201C;10.

The RPC began receiving calls about laundry pods in the spring of 2012 as advertisements were seen on TV and in magazines in Canada. Children were putting the pods in their mouths, causing them to dissolve, or bursting them by biting them.

error calls accounted for almost 14% of human exposure calls to the Poison Centre.

The increased calls to the RPC and other Canadian Poison Centres led to Health Canada issuing a warning to consumers in the summer of 2012. Children were experiencing more severe symptoms with these products such as breathing problems, drowsiness, ocular and dermal burns.

Expertise Education for Health Professionals Talk the Tox conference is the only one of its kind east of Toronto.

Talk the Tox In February 2012, the RPC hosted its 4th Biennial â&#x20AC;&#x153;Talk the Toxâ&#x20AC;? Conference for physicians, nurses, pharmacists, and paramedics. This CME accredited conference was held in Halifax and was attended by 127 health care professionals. The multidisciplinary nature of caring for the poisoned patient is emphasized in the presentations to optimize knowledge and communication among first responders and hospital clinicians. Topics included decontamination, airway management, dialyzable toxins, occupational poisonings, pediatric toxicology, and street drugs.

Cost Effectiveness Of the total calls from the public, we are able to defer 89% from EDs and physicianâ&#x20AC;&#x2122;s offices.

Cost Effectiveness Saving more than lives When it comes to cost effectiveness, poison

centres offer a large return on investment. • We prevent emergency department visits: Of the calls from the public (managed on site calls and referred to HCF calls), we are able to keep 89% at home. Research has shown that if this service did not exist, a large number of these patients would go to an emergency department (ED) or physician’s office to seek advice or treatment. The Poison Centre thus saves the health care system from the significant costs of unnecessary ED visits, and helps mitigate overcrowding in the ED. • We reduce hospital length of stay: Research also shows that Poison Centre involvement in inpatient cases of poisoning has reduced hospital length of stay, thus saving the health care system more money. • We prevent unnecessary ambulance transport: Because of direct contact with 911, we prevented unnecessary ambulance transports in 31% of cases, which also saves significant health care resources.

Cost Effectiveness Lewin Report Lewin Report: The Lewin Group, an external consulting group, was commissioned by the American Association of Poison Control Centers (AAPCC) to analyze the existing medical literature regarding the impact of the poison center system on medical utilization and to quantify the value of the system as a whole. The analyses conducted in this report confirmed the overwhelming return on investment that the poison center system contributes to the US: poison centers save Americans more than $1.8 billion every year in medical costs and lost productivity. This was based on:

In the United States, poison centers save Americans more than

• Reduced Hospital Length of Stay for Poisonings: Hospital length of stay is reduced for those admitted for poisonings in cases where physicians consult with poison control centers.

$1.8 billion every year in medical costs and lost productivity.

• Education and Outreach: In a study of public education and outreach efforts in schools and in the media, these poison center activities saved $3 for every dollar invested, stressing the importance of local initiatives.

• Reduced Work-loss Days and other Social Costs: Articles have suggested that reductions in trips to health providers due to exposure to poisons or medicines avert work-loss days for workers and working parents of affected children.

Our staff and medical consultants The IWK Regional Poison Centre (RPC) has a staff of ten Registered Nurses and one Registered Pharmacist.

with poison center assistance cut their average length of hospitalization from 6.5 to 3.5 days. American Association of Poison Control Centers

The number of poisoningrelated deaths in the USA have surpassed the number of deaths related to motor vehicle collisions.

For emergencies within Nova Scotia: