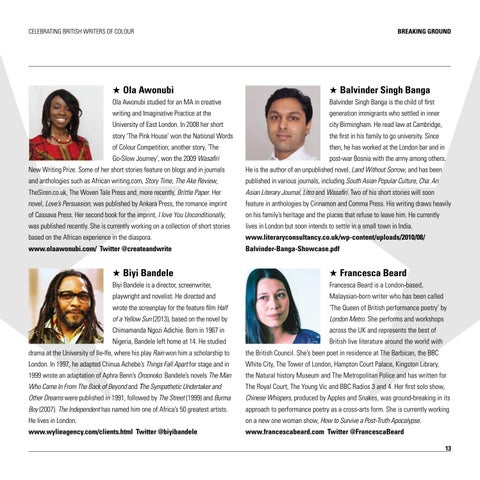 Ola Awonubi studied for an MA in creative

Balvinder Singh Banga is the child of first

writing and Imaginative Practice at the

generation immigrants who settled in inner

University of East London. In 2008 her short

the first in his family to go university. Since

of Colour Competition; another story, ‘The

then, he has worked at the London bar and in

post-war Bosnia with the army among others.

New Writing Prize. Some of her short stories feature on blogs and in journals

He is the author of an unpublished novel, Land Without Sorrow, and has been

and anthologies such as African writing.com, Story Time, The Ake Review,

Asian Literary Journal, Litro and Wasafiri. Two of his short stories will soon

feature in anthologies by Cinnamon and Comma Press. His writing draws heavily

of Cassava Press. Her second book for the imprint, I love You Unconditionally,

on his family’s heritage and the places that refuse to leave him. He currently

was published recently. She is currently working on a collection of short stories

lives in London but soon intends to settle in a small town in India.

based on the African experience in the diaspora.

Biyi Bandele is a director, screenwriter,

Francesca Beard is a London-based,

playwright and novelist. He directed and

Malaysian-born writer who has been called

wrote the screenplay for the feature film Half

‘The Queen of British performance poetry’ by

London Metro. She performs and workshops

Chimamanda Ngozi Adichie. Born in 1967 in

across the UK and represents the best of

British live literature around the world with

drama at the University of Ile-Ife, where his play Rain won him a scholarship to

the British Council. She’s been poet in residence at The Barbican, the BBC

London. In 1997, he adapted Chinua Achebe’s Things Fall Apart for stage and in

The Royal Court, The Young Vic and BBC Radios 3 and 4. Her first solo show,

Chinese Whispers, produced by Apples and Snakes, was ground-breaking in its

Boy (2007). The Independent has named him one of Africa’s 50 greatest artists.

approach to performance poetry as a cross-arts form. She is currently working

He lives in London.

on a new one woman show, How to Survive a Post-Truth Apocalypse. 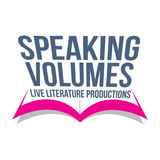