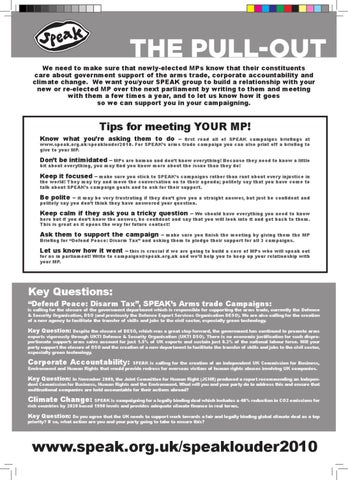 THE PULL-OUT We need to make sure that newly-elected MPs know that their constituents care about government support of the arms trade, corporate accountability and climate change. We want you/your SPEAK group to build a relationship with your new or re-elected MP over the next parliament by writing to them and meeting with them a few times a year, and to let us know how it goes so we can support you in your campaigning.

Tips for meeting YOUR MP! Know what you’re asking them to do – first read all of SPEAK campaigns briefings at www.speak.org.uk/speaklouder2010. For SPEAK’s arms trade campaign you can also print off a briefing to give to your MP. Don’t be intimidated – MPs are human and don’t know everything! Because they need to know a little bit about everything, you may find you know more about the issue than they do!

Keep it focused – make sure you stick to SPEAK’s campaigns rather than rant about every injustice in the world! They may try and move the conversation on to their agenda; politely say that you have come to talk about SPEAK’s campaign goals and to ask for their support.

Be polite – it may be very frustrating if they don’t give you a straight answer, but just be confident and politely say you don’t think they have answered your question.

here but if you don’t know the answer, be confident and say that you will look into it and get back to them. This is great as it opens the way for future contact!

Ask them to support the campaign – make sure you finish the meeting by giving them the MP Briefing for “Defend Peace: Disarm Tax” and asking them to pledge their support for all 3 campaigns. Let us know how it went – this is crucial if we are going to build a core of MPs who will speak out

for us in parliament! Write to campaigns@speak.org.uk and we’ll help you to keep up your relationship with your MP.

is calling for the closure of the government department which is responsible for supporting the arms trade, currently the Defence &amp; Security Organisation, DSO (and previously the Defence Export Services Organisation DESO). We are also calling for the creation of a new agency to facilitate the transfer of skills and jobs to the civil sector, especially green technology.

Key Question: Despite the closure of DESO, which was a great step forward, the government has continued to promote arms

exports vigorously through UKTI Defence &amp; Security Organisation (UKTI DSO). There is no economic justification for such disproportionate support: arms sales account for just 1.5% of UK exports and sustain just 0.2% of the national labour force. Will your party support the closure of DSO and the creation of a new department to facilitate the transfer of skills and jobs to the civil sector, especially green technology.

SPEAK is calling for the creation of an independent UK Commission for Business, Environment and Human Rights that would provide redress for overseas victims of human rights abuses involving UK companies.

Key Question: In November 2009, the Joint Committee for Human Right (JCHR) produced a report recommending an Independent Commission for Business, Human Rights and the Environment. What will you and your party do to address this and ensure that multinational companies are held accountable for their actions abroad?

Climate Change: SPEAK is campaigning for a legally binding deal which includes a 40% reduction in CO2 emissions for rich countries by 2020 based 1990 levels and provides adequate climate finance in real terms.

Key Question: Do you agree that the UK needs to support work towards a fair and legally binding global climate deal as a top priority? If so, what action are you and your party going to take to ensure this?

SPEAK’s January 2009 Pray &amp; Post Cards called for a supermarkets “ombudsm an” to investigate and order compensation for breaches of the code of conduct that how supermarkets sho uld deal with their suppli states ers. While this is yet to happen at tim e of press, the campaign has since received the suppor t of Con servative leader David Cam well as many Labour MPs, eron, as and on the side of the sup ermarkets Waitrose has said it would suppor t such moves as we ll.

Your campaigning through Pray &amp; Post Cards has made a huge difference!

Please prayerfully consider how you can increase your support of SPEAK’s campaigns to make them more effective, whether by giving, praying, getting others to sign the Cards, or by holding events locally. If you do want to get more involved in some way, send the Keep Involved section of a Pray &amp; Post Card back to us.

SPEAK Pray &amp; Post Cards in 2005, along with the launch of the Big Dress at the 2005 Day of Action, called for changes in company law to increase accountability for UK corporations. In 2006 the Company Law Bill was brought in, increasing transparency and introducing, for the first time, duties for directors to consider the environmental and social impacts of their actions. This was the biggest shake-up of company law for 150 years!

&amp; Post , SPEAK Pray In April 2008 ünter Verheugen, G Cards asked Commissioner in an pe ro Eu the ork todustry, to w charge of in accountability of r wards greate mpanies. In Februco view of all EU-based nounced “a re ary 2009 he an framework of the EU gal the existing le impacts of European e th to n tio in rela tries.” In veloping coun business in de t the review he said ou a statement ab nt over the last year ar that he has “le ntacts with the NGO co ul itf fru h throug is not a d others, this community an trivial issue.”

For further information on any aspect of the Pull-Out contact us on: 0207 2494309, north@speak.org.uk (Manchester), speak@speak.org.uk (London) or visit:www.speak.org.uk Also please contact us to receive regular SPEAK updates, donate to our costs in providing campaign resources, or to receive more help and support in taking action and praying.

The second page features a celebration of some of SPEAK's campaign successes over the years, achieved in coalition and partnership with other networks.