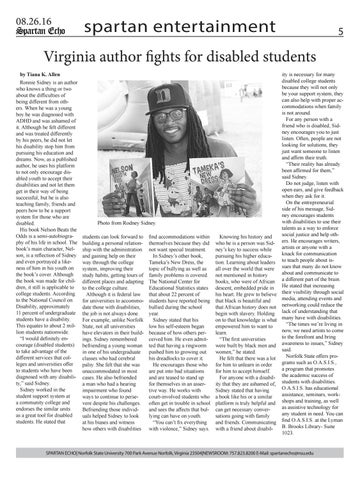 Virginia author fights for disabled students by Tiana K. Allen Ronnie Sidney is an author who knows a thing or two about the difficulties of being different from others. When he was a young boy he was diagnosed with ADHD and was ashamed of it. Although he felt different and was treated differently by his peers, he did not let his disability stop him from pursuing his education and dreams. Now, as a published author, he uses his platform to not only encourage disabled youth to accept their disabilities and not let them get in their way of being successful, but he is also teaching family, friends and peers how to be a support system for those who are disabled. His book Nelson Beats the Odds is a semi-autobiography of his life in school. The book’s main character, Nelson, is a reflection of Sidney and even portrayed a likeness of him in his youth on the book’s cover. Although the book was made for children, it still is applicable to college students. According to the National Council on Disability, approximately 11 percent of undergraduate students have a disability. This equates to about 2 million students nationwide. “I would definitely encourage (disabled students) to take advantage of the different services that colleges and universities offer to students who have been diagnosed with any disability,” said Sidney. Sidney worked in the student support system at a community college and endorses the similar units as a great tool for disabled students. He stated that

ity is necessary for many disabled college students because they will not only be your support system, they can also help with proper accommodations when family is not around. For any person with a friend who is disabled, Sidney encourages you to just listen. Often, people are not looking for solutions, they just want someone to listen and affirm their truth. “Their reality has already been affirmed for them,” said Sidney. Do not judge, listen with open ears, and give feedback when they ask for it. On the entrepreneurial side of his message, Sidney encourages students with disabilities to use their Photo from Rodney Sidney. talents as a way to enforce social justice and help othstudents can look forward to find accommodations within Knowing his history and building a personal relation- themselves because they did who he is a person was Sid- ers. He encourages writers, artists or anyone with a ship with the administration not want special treatment. ney’s key to success while knack for communication and gaining help on their In Sidney’s other book, pursuing his higher educaway through the college Tameka’s New Dress, the tion. Learning about leaders to teach people about issystem, improving their topic of bullying as well as all over the world that were sues that many do not know about and communicate to study habits, getting tours of family problems is covered. not mentioned in history different places and adapting The National Center for books, who were of African a different part of the brain. He stated that increasing to the college culture. Educational Statistics states descent, embedded pride in Although it is federal law that about 22 percent of his heart. He grew to believe their visibility through social media, attending events and for universities to accommo- students have reported being that black is beautiful and date those with disabilities, bullied during the school that African history does not networking could reduce the the job is not always done. year. begin with slavery. Holding lack of understanding that For example, unlike Norfolk Sidney stated that his on to that knowledge is what many have with disabilities. “The times we’re living in State, not all universities low his self-esteem began empowered him to want to now, we need artists to come have elevators in their build- because of how others perlearn. to the forefront and bring ings. Sidney remembered ceived him. He even admit“The first universities befriending a young woman ted that having a ringworm were built by black men and awareness to issues,” Sidney said. in one of his undergraduate pushed him to growing out women,” he stated. Norfolk State offers proclasses who had cerebral his dreadlocks to cover it. He felt that there was a lot grams such as O.A.S.I.S., palsy. She felt that she was He encourages those who for him to unlearn in order a program that promotes unaccommodated in most are put into bad situations for him to accept himself. cases. He also befriended and are teased to stand up For anyone with a disabil- the academic success of a man who had a hearing for themselves in an asserity that they are ashamed of, students with disabilities. O.A.S.I.S. has educational impairment who found tive way. He works with Sidney stated that having assistance, seminars, workways to continue to persecourt-involved students who a book like his or a similar vere despite his challenges. often get in trouble in school platform is truly helpful and shops and training, as well as assistive technology for Befriending those individand sees the affects that bul- can get necessary converany student in need. You can uals helped Sidney to look lying can have on youth. sations going with family at his biases and witness “You can’t fix everything and friends. Communicating find O.A.S.I.S. at the Lyman B. Brooks Library- Suite how others with disabilities with violence,” Sidney says. with a friend about disabil1023. 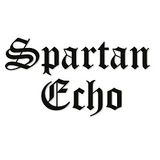 The Spartan Echo is the student newspaper of Norfolk State University.

The Spartan Echo is the student newspaper of Norfolk State University.