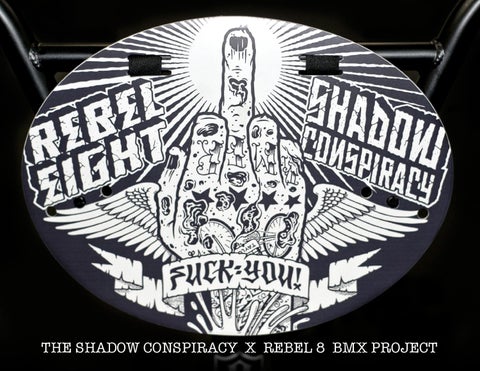 The Shadow x Rebel 8 BMX bike project is a one off, custom built BMX bike, that we are proudly displaying at the Agenda show this January. The design and art direction was created by Rebel 8’s very own Mike Giant. We could not of been more stoked to have Mike hand draw this one of kind design for the Shadow BMX project! Rather than taking the mass production route of creating screen-printed or CAD cut decals to be placed on the bike, we hand painted Mike’s artwork onto the Shadow components and Subrosa frame and fork. One of the main features is the retro oval BMX number plate highlighting Mike’s artwork. This plate was produced by a CAD router cut and digitally printed on white lexan plastic. Along with this, our good friend of Shadow, James Covington, hand-made a custom Shadow Solus seat and cross-bar pad that is made of 100% deer skin suede featuring raised artwork by Mike Giant. Hope this behind the scenes Shadow x Rebel 8 BMX bike build lookbook can help give you a little insight to what it took for us to produce this one of a kind machine. Enjoy, Ronnie B

THIS PROJECT WOULDN’T OF BEEN POSSIBLE WITHOUT THE HELP AND HARD WORK FROM THE FOLLOWING INDIVIDUALS: The Shadow Conspiracy is proud to announce it has been invited as part of the introduction to BMX at the Agenda tradeshow. To celebrate, we...

The Shadow Conspiracy is proud to announce it has been invited as part of the introduction to BMX at the Agenda tradeshow. To celebrate, we...