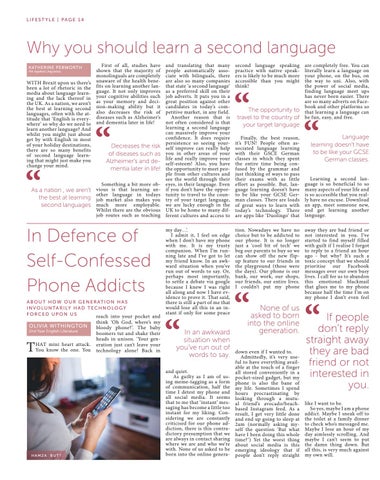 WITH Brexit upon us there’s been a lot of rhetoric in the media about language learning and the lack thereof in the UK. As a nation, we aren’t the best at learning second languages, often with the attitude that ‘English is everywhere’ so why do we need to learn another language? And whilst you might just about get by with English in most of your holiday destinations, there are so many benefits of second language learning that might just make you change your mind.

As a nation , we aren’t the best at learning second languages

First of all, studies have shown that the majority of monolinguals are completely unaware of the health benefits on learning another language. It not only improves your cognitive abilities such as your memory and decision-making ability but it also decreases the risk of diseases such as Alzheimer’s and dementia later in life!

Decreases the risk of diseases such as Alzheimer’s and dementia later in life! Something a bit more obvious is that learning another language in todays job market also makes you much more employable. Whilst there are the obvious job routes such as teaching

HAT mini heart attack. You know the one. You

reach into your pocket and think ‘Oh God, where’s my bloody phone?’. The baby boomers tut and shake their heads in unison. ‘Your generation just can’t leave your technology alone! Back in

and translating that many people automatically associate with bilinguals, there are also so many companies that state ‘a second language’ as a preferred skill on their job adverts. It puts you in a great position against other candidates in today’s competitive market, in any field. Another reason that is not often considered is that learning a second language can massively improve your confidence. It does require persistence so seeing yourself improve can really help you in other areas of your life and really improve your self-esteem! Also, you have the opportunity to meet people from other cultures and see the world through their eyes, in their language. Even if you don’t have the opportunity to travel to the country of your target language, we are lucky enough in the UK to be home to many different cultures and access to my day…’. I admit it, I feel on edge when I don’t have my phone with me. It is my trusty companion. When I’m running late and I’ve got to let my friend know. In an awkward situation when you’ve run out of words to say. Or, perhaps most importantly, to settle a debate via google because I knew I was right all along and now I have evidence to prove it. That said, there is still a part of me that would lose all this in an instant if only for some peace

In an awkward situation when you’ve run out of words to say. and quiet. As guilty as I am of using meme-tagging as a form of communication, half the time I detest my phone and all social media. It seems that to me that ‘instant’ messaging has become a little too instant for my liking. Considering we are constantly criticised for our phone addiction, there is this contradictory presumption that we are always in contact sharing where we are and who we’re with. None of us asked to be born into the online genera-

second language speaking practice with native speakers is likely to be much more accessible than you might think!

The opportunity to travel to the country of your target language Finally, the best reason, it’s FUN! People often associated language learning with their GSCE German classes in which they spent the entire time being confused by the grammar and just thinking of ways to pass their exams with as little effort as possible. But, language learning doesn’t have to be like your GCSE German classes. There are loads of great ways to learn with today’s technology. There are apps like ‘Duolingo’ that tion. Nowadays we have no choice but to be addicted to our phone. It is no longer just a ‘cool bit of tech’ we beg our parents to buy so we can show off the new flipup feature to our friends in the playground (those were the days). Our phone is our bank, our work, our shops, our friends, our entire lives. I couldn’t put my phone

None of us asked to born into the online generation. down even if I wanted to. Admittedly, it’s very useful to have everything available at the touch of a finger all stored conveniently in a pocket-sized gadget, but my phone is also the bane of my life. Sometimes I spend hours procrastinating by looking through a mutual friend’s avocado/beachbased Instagram feed. As a result, I get very little done and end up going to sleep at 2am (normally asking myself the question ‘But what have I been doing this whole time?’) Yet the worst thing about social media is this emerging ideology that if people don’t reply straight

are completely free. You can literally learn a language on your phone, on the bus, on the way to uni. Also, with the power of social media, finding language meet ups has never been easier. There are so many adverts on Facebook and other platforms so that learning a language can be fun, easy, and free.

Language learning doesn’t have to be like your GCSE German classes. Learning a second language is so beneficial to so many aspects of your life and is so accessible that you really have no excuse. Download an app, meet someone new, and get learning another language. away they are bad friend or not interested in you. I’ve started to find myself filled with guilt if I realise I forgot to reply to a friend an hour ago - but why? It’s such a toxic concept that we should prioritise our Facebook messages over our own busy lives. I call for us to abandon this emotional blackmail that glues me to my phone because half the time I’m on my phone I don’t even feel

If people don’t reply straight away they are bad friend or not interested in you. like I want to be. So yes, maybe I am a phone addict. Maybe I sneak off to the toilet at a family dinner to check who’s messaged me. Maybe I lose an hour of my day aimlessly scrolling. And maybe I can’t seem to put the damn thing down. But all this, is very much against my own will. 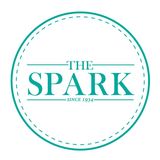 Tuition fees are being reviewed, lecturers are striking in an effort to avoid losing thousands after retirement and students are getting fed...

Tuition fees are being reviewed, lecturers are striking in an effort to avoid losing thousands after retirement and students are getting fed...