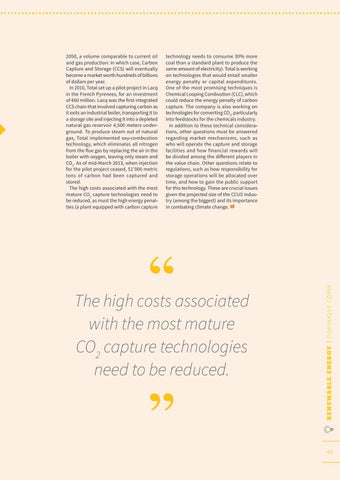 technology needs to consume 30% more coal than a standard plant to produce the same amount of electricity). Total is working on technologies that would entail smaller energy penalty or capital expenditures. One of the most promising techniques is Chemical Looping Combustion (CLC), which could reduce the energy penalty of carbon capture. The company is also working on technologies for converting CO2, particularly into feedstocks for the chemicals industry. In addition to these technical considerations, other questions must be answered regarding market mechanisms, such as who will operate the capture and storage facilities and how financial rewards will be divided among the different players in the value chain. Other questions relate to regulations, such as how responsibility for storage operations will be allocated over time, and how to gain the public support for this technology. These are crucial issues given the projected size of the CCUS industry (among the biggest) and its importance in combating climate change.

The high costs associated with the most mature CO2 capture technologies need to be reduced.

2050, a volume comparable to current oil and gas production: in which case, Carbon Capture and Storage (CCS) will eventually become a market worth hundreds of billions of dollars per year. In 2010, Total set up a pilot project in Lacq in the French Pyrenees, for an investment of â&amp;#x201A;Ź60 million. Lacq was the first integrated CCS chain that involved capturing carbon as it exits an industrial boiler, transporting it to a storage site and injecting it into a depleted natural gas reservoir 4,500 meters underground. To produce steam out of natural gas, Total implemented oxy-combustion technology, which eliminates all nitrogen from the flue gas by replacing the air in the boiler with oxygen, leaving only steam and CO2. As of mid-March 2013, when injection for the pilot project ceased, 51â&amp;#x20AC;&amp;#x2122;000 metric tons of carbon had been captured and stored. The high costs associated with the most mature CO2 capture technologies need to be reduced, as must the high energy penalties (a plant equipped with carbon capture

This publication represents an original approach to collaboration as, for the first time, the world’s leading economic media and global experts from the public and private sector have come together to present the most promising innovations dealing with sustainable cities, and to illustrate the ways in which stakeholders can better work together to reach this goal. It offers a 360 degree approach, with examples from across the globe, to show that urban sustainability represents not a utopia, but a reality already under construction.