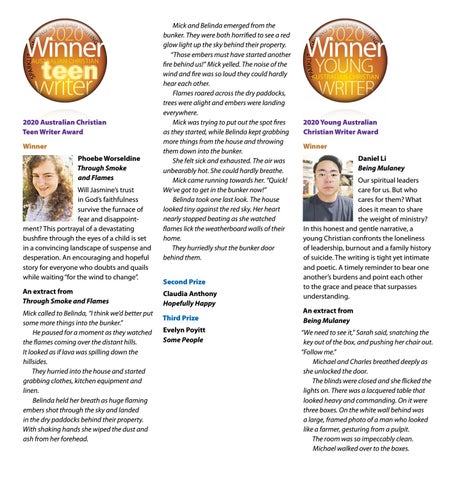 2020 Australian Christian Teen Writer Award Winner Phoebe Worseldine Through Smoke and Flames Will Jasmine’s trust in God’s faithfulness survive the furnace of fear and disappointment? This portrayal of a devastating bushfire through the eyes of a child is set in a convincing landscape of suspense and desperation. An encouraging and hopeful story for everyone who doubts and quails while waiting “for the wind to change”. An extract from Through Smoke and Flames Mick called to Belinda, “I think we’d better put some more things into the bunker.” He paused for a moment as they watched the flames coming over the distant hills. It looked as if lava was spilling down the hillsides. They hurried into the house and started grabbing clothes, kitchen equipment and linen. Belinda held her breath as huge flaming embers shot through the sky and landed in the dry paddocks behind their property. With shaking hands she wiped the dust and ash from her forehead.

Mick and Belinda emerged from the bunker. They were both horrified to see a red glow light up the sky behind their property. “Those embers must have started another fire behind us!” Mick yelled. The noise of the wind and fire was so loud they could hardly hear each other. Flames roared across the dry paddocks, trees were alight and embers were landing everywhere. Mick was trying to put out the spot fires as they started, while Belinda kept grabbing more things from the house and throwing them down into the bunker. She felt sick and exhausted. The air was unbearably hot. She could hardly breathe. Mick came running towards her. “Quick! We’ve got to get in the bunker now!” Belinda took one last look. The house looked tiny against the red sky. Her heart nearly stopped beating as she watched flames lick the weatherboard walls of their home. They hurriedly shut the bunker door behind them. Second Prize Claudia Anthony Hopefully Happy Third Prize Evelyn Poyitt Some People

2020 Young Australian Christian Writer Award Winner Daniel Li Being Mulaney Our spiritual leaders care for us. But who cares for them? What does it mean to share the weight of ministry? In this honest and gentle narrative, a young Christian confronts the loneliness of leadership, burnout and a family history of suicide. The writing is tight yet intimate and poetic. A timely reminder to bear one another’s burdens and point each other to the grace and peace that surpasses understanding. An extract from Being Mulaney “We need to see it,” Sarah said, snatching the key out of the box, and pushing her chair out. “Follow me.” Michael and Charles breathed deeply as she unlocked the door. The blinds were closed and she flicked the lights on. There was a lacquered table that looked heavy and commanding. On it were three boxes. On the white wall behind was a large, framed photo of a man who looked like a farmer, gesturing from a pulpit. The room was so impeccably clean. Michael walked over to the boxes.

Where the Gospel is preached, books are needed. SparkLit advances God’s Kingdom by empowering Christian writers, publishers and distributors. (The Society for Promoting Christian Knowledge Australia Incorporated and the Australian Christian Literature Society.)