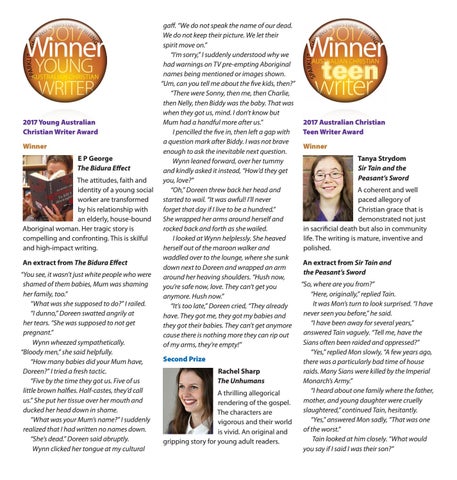 2017 Young Australian Christian Writer Award Winner E P George The Bidura Effect The attitudes, faith and identity of a young social worker are transformed by his relationship with an elderly, house-bound Aboriginal woman. Her tragic story is compelling and confronting. This is skilful and high-impact writing. An extract from The Bidura Effect “You see, it wasn’t just white people who were shamed of them babies, Mum was shaming her family, too.” “What was she supposed to do?” I railed. “I dunno,” Doreen swatted angrily at her tears. “She was supposed to not get pregnant.” Wynn wheezed sympathetically. “Bloody men,” she said helpfully. “How many babies did your Mum have, Doreen?” I tried a fresh tactic. “Five by the time they got us. Five of us little brown halfies. Half-castes, they’d call us.” She put her tissue over her mouth and ducked her head down in shame. “What was your Mum’s name?” I suddenly realized that I had written no names down. “She’s dead.” Doreen said abruptly. Wynn clicked her tongue at my cultural

gaff. “We do not speak the name of our dead. We do not keep their picture. We let their spirit move on.” “I’m sorry,” I suddenly understood why we had warnings on TV pre-empting Aboriginal names being mentioned or images shown. “Um, can you tell me about the five kids, then?” “There were Sonny, then me, then Charlie, then Nelly, then Biddy was the baby. That was when they got us, mind. I don’t know but Mum had a handful more after us.” 2017 Australian Christian I pencilled the five in, then left a gap with Teen Writer Award a question mark after Biddy. I was not brave Winner enough to ask the inevitable next question. Tanya Strydom Wynn leaned forward, over her tummy Sir Tain and the and kindly asked it instead, “How’d they get Peasant’s Sword you, love?” “Oh,” Doreen threw back her head and A coherent and well started to wail. “It was awful! I’ll never paced allegory of forget that day if I live to be a hundred.” Christian grace that is She wrapped her arms around herself and demonstrated not just rocked back and forth as she wailed. in sacrificial death but also in community I looked at Wynn helplessly. She heaved life. The writing is mature, inventive and herself out of the maroon walker and polished. waddled over to the lounge, where she sunk An extract from Sir Tain and down next to Doreen and wrapped an arm the Peasant’s Sword around her heaving shoulders. “Hush now, “So, where are you from?” you’re safe now, love. They can’t get you “Here, originally,” replied Tain. anymore. Hush now.” It was Mon’s turn to look surprised. “I have “It’s too late,” Doreen cried, “They already never seen you before,” he said. have. They got me, they got my babies and “I have been away for several years,” they got their babies. They can’t get anymore answered Tain vaguely. “Tell me, have the cause there is nothing more they can rip out Sians often been raided and oppressed?” of my arms, they’re empty!” “Yes,” replied Mon slowly, “A few years ago, Second Prize there was a particularly bad time of house Rachel Sharp raids. Many Sians were killed by the Imperial The Unhumans Monarch’s Army.” “I heard about one family where the father, A thrilling allegorical mother, and young daughter were cruelly rendering of the gospel. slaughtered,” continued Tain, hesitantly. The characters are “Yes,” answered Mon sadly, “That was one vigorous and their world of the worst.” is vivid. An original and Tain looked at him closely. “What would gripping story for young adult readers. you say if I said I was their son?”