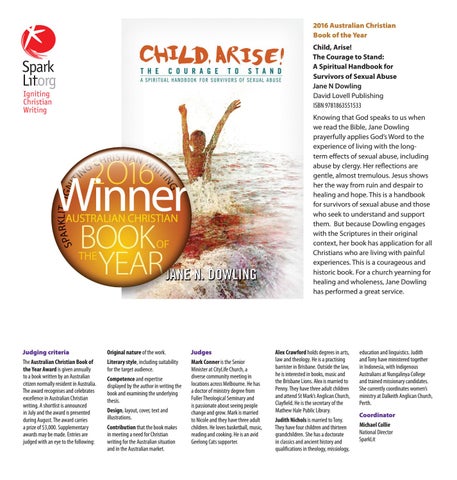 2016 Australian Christian Book of the Year Child, Arise! The Courage to Stand: A Spiritual Handbook for Survivors of Sexual Abuse Jane N Dowling David Lovell Publishing ISBN 9781863551533 Knowing that God speaks to us when we read the Bible, Jane Dowling prayerfully applies God’s Word to the experience of living with the longterm effects of sexual abuse, including abuse by clergy. Her reflections are gentle, almost tremulous. Jesus shows her the way from ruin and despair to healing and hope. This is a handbook for survivors of sexual abuse and those who seek to understand and support them. But because Dowling engages with the Scriptures in their original context, her book has application for all Christians who are living with painful experiences. This is a courageous and historic book. For a church yearning for healing and wholeness, Jane Dowling has performed a great service.

Original nature of the work. Literary style, including suitability for the target audience. Competence and expertise displayed by the author in writing the book and examining the underlying thesis. Design, layout, cover, text and illustrations. Contribution that the book makes in meeting a need for Christian writing for the Australian situation and in the Australian market.

Judges Mark Conner is the Senior Minister at CityLife Church, a diverse community meeting in locations across Melbourne. He has a doctor of ministry degree from Fuller Theological Seminary and is passionate about seeing people change and grow. Mark is married to Nicole and they have three adult children. He loves basketball, music, reading and cooking. He is an avid Geelong Cats supporter.

Alex Crawford holds degrees in arts, law and theology. He is a practising barrister in Brisbane. Outside the law, he is interested in books, music and the Brisbane Lions. Alex is married to Penny. They have three adult children and attend St Mark’s Anglican Church, Clayfield. He is the secretary of the Mathew Hale Public Library. Judith Nichols is married to Tony. They have four children and thirteen grandchildren. She has a doctorate in classics and ancient history and qualifications in theology, missiology,