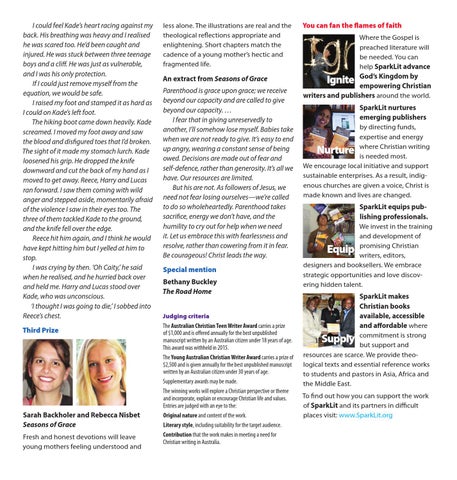 I could feel Kade’s heart racing against my back. His breathing was heavy and I realised he was scared too. He’d been caught and injured. He was stuck between three teenage boys and a cliff. He was just as vulnerable, and I was his only protection. If I could just remove myself from the equation, we would be safe. I raised my foot and stamped it as hard as I could on Kade’s left foot. The hiking boot came down heavily. Kade screamed. I moved my foot away and saw the blood and disfigured toes that I’d broken. The sight of it made my stomach lurch. Kade loosened his grip. He dropped the knife downward and cut the back of my hand as I moved to get away. Reece, Harry and Lucas ran forward. I saw them coming with wild anger and stepped aside, momentarily afraid of the violence I saw in their eyes too. The three of them tackled Kade to the ground, and the knife fell over the edge. Reece hit him again, and I think he would have kept hitting him but I yelled at him to stop. I was crying by then. ‘Oh Caity,’ he said when he realised, and he hurried back over and held me. Harry and Lucas stood over Kade, who was unconscious. ‘I thought I was going to die,’ I sobbed into Reece’s chest. Third Prize

You can fan the flames of faith Where the Gospel is preached literature will be needed. You can help SparkLit advance Kingdom by Ignite God’s empower­ing Christian writers and publishers around the world. SparkLit nurtures emerging ­publishers by directing funds, expertise and energy where Christian writing Nurture is needed most. We encourage local initiative and support sustainable enterprises. As a result, indigenous churches are given a voice, Christ is made known and lives are changed. SparkLit equips publishing professionals. We invest in the training and development of promising Christian Equip writers, editors, designers and booksellers. We embrace strategic opportunities and love discovering hidden talent. SparkLit makes Christian books available, accessible and affordable where ­commitment is strong Supply but ­support and resources are scarce. We provide theological texts and essential reference works to students and pastors in Asia, Africa and the Middle East. To find out how you can support the work of SparkLit and its partners in difficult places visit: www.SparkLit.org