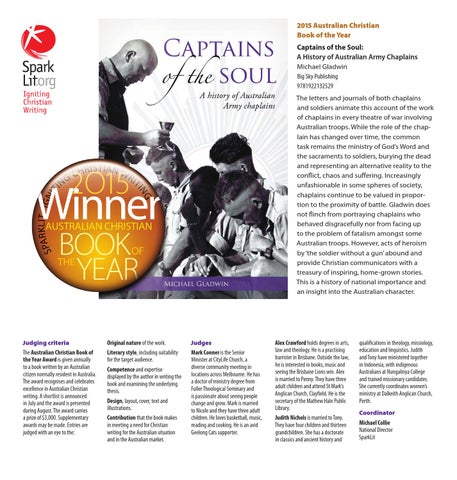 2015 Australian Christian Book of the Year Captains of the Soul: A History of Australian Army Chaplains Michael Gladwin Big Sky Publishing 9781922132529 The letters and journals of both chaplains and soldiers animate this account of the work of chaplains in every theatre of war involving Australian troops. While the role of the chaplain has changed over time, the common task remains the ministry of God’s Word and the sacraments to soldiers, burying the dead and representing an alternative reality to the conflict, chaos and suffering. Increasingly unfashionable in some spheres of society, chaplains continue to be valued in proportion to the proximity of battle. Gladwin does not flinch from portraying chaplains who behaved disgracefully nor from facing up to the problem of fatalism amongst some Australian troops. However, acts of heroism by ‘the soldier without a gun’ abound and provide Christian communicators with a treasury of inspiring, home-grown stories. This is a history of national importance and an insight into the Australian character.

Original nature of the work. Literary style, including suitability for the target audience. Competence and expertise displayed by the author in writing the book and examining the underlying thesis. Design, layout, cover, text and illustrations. Contribution that the book makes in meeting a need for Christian writing for the Australian situation and in the Australian market.

Judges Mark Conner is the Senior Minister at CityLife Church, a diverse community meeting in locations across Melbourne. He has a doctor of ministry degree from Fuller Theological Seminary and is passionate about seeing people change and grow. Mark is married to Nicole and they have three adult children. He loves basketball, music, reading and cooking. He is an avid Geelong Cats supporter.

Alex Crawford holds degrees in arts, law and theology. He is a practising barrister in Brisbane. Outside the law, he is interested in books, music and seeing the Brisbane Lions win. Alex is married to Penny. They have three adult children and attend St Mark’s Anglican Church, Clayfield. He is the secretary of the Mathew Hale Public Library. Judith Nichols is married to Tony. They have four children and thirteen grandchildren. She has a doctorate in classics and ancient history and