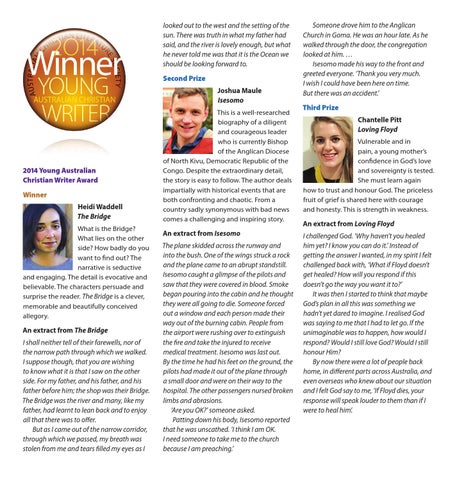 looked out to the west and the setting of the sun. There was truth in what my father had said, and the river is lovely enough, but what he never told me was that it is the Ocean we should be looking forward to. Second Prize Joshua Maule Isesomo

2014 Young Australian Christian Writer Award Winner Heidi Waddell The Bridge What is the Bridge? What lies on the other side? How badly do you want to find out? The narrative is seductive and engaging. The detail is evocative and believable. The characters persuade and surprise the reader. The Bridge is a clever, memorable and beautifully conceived allegory. An extract from The Bridge I shall neither tell of their farewells, nor of the narrow path through which we walked. I suppose though, that you are wishing to know what it is that I saw on the other side. For my father, and his father, and his father before him; the shop was their Bridge. The Bridge was the river and many, like my father, had learnt to lean back and to enjoy all that there was to offer. But as I came out of the narrow corridor, through which we passed, my breath was stolen from me and tears filled my eyes as I

This is a well-researched biography of a diligent and courageous leader who is currently Bishop of the Anglican Diocese of North Kivu, Democratic Republic of the Congo. Despite the extraordinary detail, the story is easy to follow. The author deals impartially with historical events that are both confronting and chaotic. From a country sadly synonymous with bad news comes a challenging and inspiring story. An extract from Isesomo The plane skidded across the runway and into the bush. One of the wings struck a rock and the plane came to an abrupt standstill. Isesomo caught a glimpse of the pilots and saw that they were covered in blood. Smoke began pouring into the cabin and he thought they were all going to die. Someone forced out a window and each person made their way out of the burning cabin. People from the airport were rushing over to extinguish the fire and take the injured to receive medical treatment. Isesomo was last out. By the time he had his feet on the ground, the pilots had made it out of the plane through a small door and were on their way to the hospital. The other passengers nursed broken limbs and abrasions. ‘Are you OK?’ someone asked. Patting down his body, Isesomo reported that he was unscathed. ‘I think I am OK. I need someone to take me to the church because I am preaching.’

Someone drove him to the Anglican Church in Goma. He was an hour late. As he walked through the door, the congregation looked at him. … Isesomo made his way to the front and greeted everyone. ‘Thank you very much. I wish I could have been here on time. But there was an accident.’ Third Prize Chantelle Pitt Loving Floyd Vulnerable and in pain, a young mother’s confidence in God’s love and sovereignty is tested. She must learn again how to trust and honour God. The priceless fruit of grief is shared here with courage and honesty. This is strength in weakness. An extract from Loving Floyd I challenged God. ‘Why haven’t you healed him yet? I know you can do it.’ Instead of getting the answer I wanted, in my spirit I felt challenged back with, ‘What if Floyd doesn’t get healed? How will you respond if this doesn’t go the way you want it to?’ It was then I started to think that maybe God’s plan in all this was something we hadn’t yet dared to imagine. I realised God was saying to me that I had to let go. If the unimaginable was to happen, how would I respond? Would I still love God? Would I still honour Him? By now there were a lot of people back home, in different parts across Australia, and even overseas who knew about our situation and I felt God say to me, ‘If Floyd dies, your response will speak louder to them than if I were to heal him’.

Where the gospel is preached literature will be needed. SparkLit advances God’s Kingdom by empowering Christian writers, publishers and distributors.