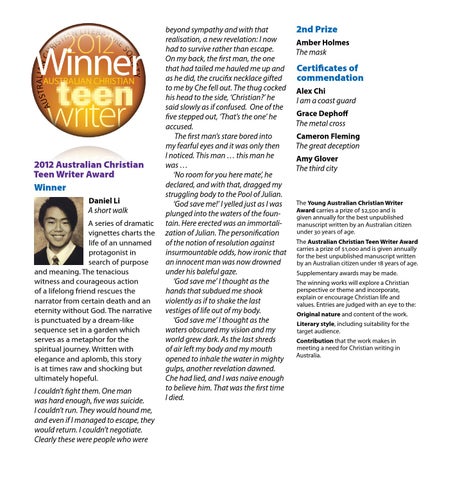 2012 Australian Christian Teen Writer Award Winner Daniel Li A short walk A series of dramatic vignettes charts the life of an unnamed protagonist in search of purpose and meaning. The tenacious witness and courageous action of a lifelong friend rescues the narrator from certain death and an eternity without God. The narrative is punctuated by a dream-like sequence set in a garden which serves as a metaphor for the spiritual journey. Written with elegance and aplomb, this story is at times raw and shocking but ultimately hopeful. I couldn’t fight them. One man was hard enough, five was suicide. I couldn’t run. They would hound me, and even if I managed to escape, they would return. I couldn’t negotiate. Clearly these were people who were

beyond sympathy and with that realisation, a new revelation: I now had to survive rather than escape. On my back, the first man, the one that had tailed me hauled me up and as he did, the crucifix necklace gifted to me by Che fell out. The thug cocked his head to the side, ‘Christian?’ he said slowly as if confused. One of the five stepped out, ‘That’s the one’ he accused. The first man’s stare bored into my fearful eyes and it was only then I noticed. This man … this man he was … ‘No room for you here mate’, he declared, and with that, dragged my struggling body to the Pool of Julian. ‘God save me!’ I yelled just as I was plunged into the waters of the fountain. Here erected was an immortalization of Julian. The personification of the notion of resolution against insurmountable odds, how ironic that an innocent man was now drowned under his baleful gaze. ‘God save me’ I thought as the hands that subdued me shook violently as if to shake the last vestiges of life out of my body. ‘God save me’ I thought as the waters obscured my vision and my world grew dark. As the last shreds of air left my body and my mouth opened to inhale the water in mighty gulps, another revelation dawned. Che had lied, and I was naive enough to believe him. That was the first time I died.