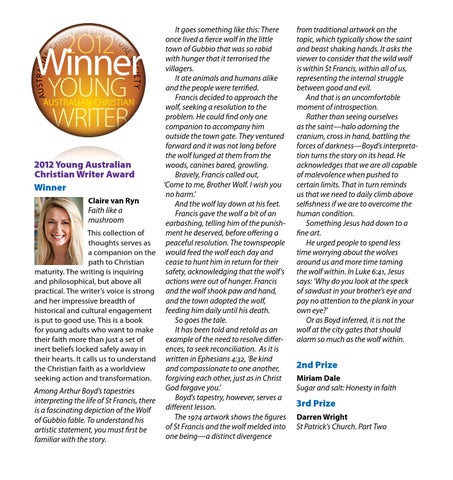 It goes something like this: There once lived a fierce wolf in the little town of Gubbio that was so rabid with hunger that it terrorised the villagers. It ate animals and humans alike and the people were terrified. Francis decided to approach the wolf, seeking a resolution to the problem. He could find only one companion to accompany him outside the town gate. They ventured forward and it was not long before the wolf lunged at them from the woods, canines bared, growling. 2012 Young Australian Bravely, Francis called out, Christian Writer Award ‘Come to me, Brother Wolf. I wish you Winner no harm.’ Claire van Ryn And the wolf lay down at his feet. Faith like a Francis gave the wolf a bit of an mushroom earbashing, telling him of the punishment he deserved, before offering a This collection of peaceful resolution. The townspeople thoughts serves as a companion on the would feed the wolf each day and cease to hunt him in return for their path to Christian safety, acknowledging that the wolf’s maturity. The writing is inquiring actions were out of hunger. Francis and philosophical, but above all practical. The writer’s voice is strong and the wolf shook paw and hand, and the town adopted the wolf, and her impressive breadth of feeding him daily until his death. historical and cultural engagement So goes the tale. is put to good use. This is a book It has been told and retold as an for young adults who want to make example of the need to resolve differtheir faith more than just a set of ences, to seek reconciliation. As it is inert beliefs locked safely away in their hearts. It calls us to understand written in Ephesians 4:32, ‘Be kind and compassionate to one another, the Christian faith as a worldview forgiving each other, just as in Christ seeking action and transformation. God forgave you.’ Among Arthur Boyd’s tapestries Boyd’s tapestry, however, serves a interpreting the life of St Francis, there different lesson. is a fascinating depiction of the Wolf The 1974 artwork shows the figures of Gubbio fable. To understand his of St Francis and the wolf melded into artistic statement, you must first be one being—a distinct divergence familiar with the story.

from traditional artwork on the topic, which typically show the saint and beast shaking hands. It asks the viewer to consider that the wild wolf is within St Francis, within all of us, representing the internal struggle between good and evil. And that is an uncomfortable moment of introspection. Rather than seeing ourselves as the saint—halo adorning the cranium, cross in hand, battling the forces of darkness—Boyd’s interpretation turns the story on its head. He acknowledges that we are all capable of malevolence when pushed to certain limits. That in turn reminds us that we need to daily climb above selfishness if we are to overcome the human condition. Something Jesus had down to a fine art. He urged people to spend less time worrying about the wolves around us and more time taming the wolf within. In Luke 6:41, Jesus says: ‘Why do you look at the speck of sawdust in your brother’s eye and pay no attention to the plank in your own eye?’ Or as Boyd inferred, it is not the wolf at the city gates that should alarm so much as the wolf within.