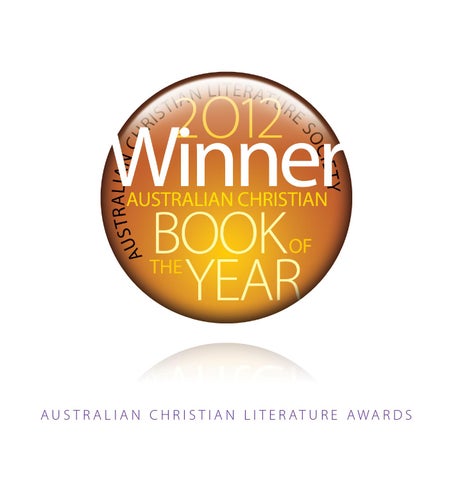 2012 Australian Christian Book of the Year Gumbuli of Ngukurr: Aboriginal elder in Arnhem Land Murray Seiffert Acorn Press ISBN 9780987132925 Few indigenous Australians have been the subject of so rigorous a biography. This is a unique and timely contribution to the story of Aboriginal engagement with western culture and Christianity and no significant consequence of this encounter has been overlooked. While not typical of the colonial experience, the story of the man Michael Gumbuli Wurramara and the place Ngukurr does, nevertheless, challenge and correct numerous popular assumptions about the relationship between government, missions and Aborigines. At times this makes for profoundly uncomfortable and provocative reading. It is always informative. Seiffert fearlessly incorporates a wide range of views and honestly evaluates the reliability of his sources which are many and varied.   Gumbuli is an example of an indigenous leader emerging from the church. His appraisal of traditional beliefs, customs and ceremonies and his dialogue with Tanzanian and Ugandan Christians are fascinating. These missiological case studies are of universal interest. Gumbuli was ordained priest in 1973 and in 2010 he was appointed a Member of the Order of Australia, ‘for service to the Anglican Church of Australia through a range of pastoral care and advisory roles, as a supporter of the production of the Kriol Bible, and to the community of Ngukurr’. This singular story of indigenous protagonism, self-determination and leadership in the face of overwhelming obstacles—hostile opposition, blind ignorance and numbing indifference—maps a way forward for the peoples of this continent.

A consummate storyteller takes on the greatest story ever told. Blainey deftly weaves together epic events, developments and movements. He pauses, when instructive, to examine sometimes obscure episodes and people. The result is a simple yet breathtaking narrative. Blainey’s impartiality is especially evident in his treatment of major conflicts, such as the Reformation. It is significant that in an increasingly Christophobic society, a prominent historian at the peak of his prestige has written an accessible history that places Jesus at the centre of human history.

A systematic and practical guide for evangelists and preachers addressing a pluralist society and ­unsympathetic culture. Particularly refreshing and useful is the exhortation to respect our audience by acknowledging personality types (intellectually or emotionally oriented), understanding the listeners’ context and not misrepresenting their beliefs … or our own. Instead of bowing to political correctness we are challenged to confidently present ‘the gospel in all its scandalous reality’.

insightful. This i twenty-four Aus writers and lead yearning, grace reflective mood and encourage individually and volume of medi

A transparent and gripping testimony of radical personal transformation under stress. Paterson shares how s with her son Cameron chaln faith, pride and need for control hem both to grow. In a culture uffering and devalues the lives of sabilities the story of Cecily and owerful and necessary witness. the same time profoundly ractical. An antidote for those of comfort and afraid to love.

Witt is a secondary school teacher, mother and author of a best-selling series of books for teenagers. With this book she befriends parents just as the challenge of parenting reaches its climax. Her humour, enthusiasm and confidence are infectious. Biblical values, boundaries and unconditional acceptance combine to provide a ‘soft place to land’ for parents and teenagers alike. Witt is familiar with trends in mental health and social media, and a resource list and links to her web pages offer the possibility of further interaction.

Short-listed The zoo in you: Faith lessons on the wildness within Cameron Semmens (Ed.) Crooked Nose Wisdom ISBN 9780975710036

Tiger. Turtle. Tadpole. Trout. The stimuli are zoological, the results are original, engaging and is a unique opportunity to see stralian Christian musicians, ders grapple with doubt, grief, e and more, in an intimate and d. There is something to enrich Christians of every stripe, both d in groups. This surprising itations is as valuable as it is rare.

Colour worms: Learn colours the fun and easy way Shan Joseph Growing Faith ISBN 9781921460791 Shan Joseph uses vivid colours and simple rhyme to awaken the imagination of preschool readers. The colour worms help children to learn by observation and together with parents acknowledge God as the loving creator of all that we see.

The Australian Christian Book of the Year Award is given annually to an original book written by an Australian citizen normally resident in Australia and published by an Australian publisher. The Award recognises and celebrates excellence in Australian Christian writing. A short list is announced in July and the awards are presented during August. The Award carries a prize of $2,500. Supplementary awards may be made. Entries are judged with an eye to the: Original nature of the work. Literary style, including suitability for the target audience. Competence and expertise displayed by the author in writing the book and examining the underlying thesis. Design, layout, cover, text and illustrations. Contribution that the book makes in meeting a need for Christian writing for the Australian situation and in the Australian market.

Judges Alex Crawford holds degrees in arts, law and theology. He is a practising barrister in Brisbane. Outside the law, he is interested in books, music and seeing the Brisbane Lions win. Alex is married to Penny. They have three adult children and attend St Mark’s Anglican Church, Clayfield. He is the secretary of the Mathew Hale Public Library. Chantelle Ogilvie-Ellis is Justice and Peace Promoter for the Catholic Archdiocese of Sydney. Chantelle has a degree in media and communications, a graduate certificate in interfaith dialogue and is completing a masters degree in theology. Chantelle has worked in youth and social justice ministry and has taught and tutored theology at a number of Catholic institutions. She enjoys art, reading, travel, and time with her husband, Evan. Mark Conner is the Senior Minister at CityLife Church, a diverse community of Christ-followers meeting in locations across Melbourne. He has a doctor of ministry degree from Fuller Theological Seminary and is passionate about seeing people change and grow. Mark is married to Nicole and they have three adult children. He loves basketball, music, reading and cooking. He is an avid Geelong Cats supporter.

It goes something like this: There once lived a fierce wolf in the little town of Gubbio that was so rabid with hunger that it terrorised the villagers. It ate animals and humans alike and the people were terrified. Francis decided to approach the wolf, seeking a resolution to the problem. He could find only one companion to accompany him outside the town gate. They ventured forward and it was not long before the wolf lunged at them from the woods, canines bared, growling. 2012 Young Australian Bravely, Francis called out, Christian Writer Award ‘Come to me, Brother Wolf. I wish you Winner no harm.’ Claire van Ryn And the wolf lay down at his feet. Faith like a Francis gave the wolf a bit of an mushroom earbashing, telling him of the punishment he deserved, before offering a This collection of peaceful resolution. The townspeople thoughts serves as a companion on the would feed the wolf each day and cease to hunt him in return for their path to Christian safety, acknowledging that the wolf’s maturity. The writing is inquiring actions were out of hunger. Francis and philosophical, but above all practical. The writer’s voice is strong and the wolf shook paw and hand, and the town adopted the wolf, and her impressive breadth of feeding him daily until his death. historical and cultural engagement So goes the tale. is put to good use. This is a book It has been told and retold as an for young adults who want to make example of the need to resolve differtheir faith more than just a set of ences, to seek reconciliation. As it is inert beliefs locked safely away in their hearts. It calls us to understand written in Ephesians 4:32, ‘Be kind and compassionate to one another, the Christian faith as a worldview forgiving each other, just as in Christ seeking action and transformation. God forgave you.’ Among Arthur Boyd’s tapestries Boyd’s tapestry, however, serves a interpreting the life of St Francis, there different lesson. is a fascinating depiction of the Wolf The 1974 artwork shows the figures of Gubbio fable. To understand his of St Francis and the wolf melded into artistic statement, you must first be one being—a distinct divergence familiar with the story.

from traditional artwork on the topic, which typically show the saint and beast shaking hands. It asks the viewer to consider that the wild wolf is within St Francis, within all of us, representing the internal struggle between good and evil. And that is an uncomfortable moment of introspection. Rather than seeing ourselves as the saint—halo adorning the cranium, cross in hand, battling the forces of darkness—Boyd’s interpretation turns the story on its head. He acknowledges that we are all capable of malevolence when pushed to certain limits. That in turn reminds us that we need to daily climb above selfishness if we are to overcome the human condition. Something Jesus had down to a fine art. He urged people to spend less time worrying about the wolves around us and more time taming the wolf within. In Luke 6:41, Jesus says: ‘Why do you look at the speck of sawdust in your brother’s eye and pay no attention to the plank in your own eye?’ Or as Boyd inferred, it is not the wolf at the city gates that should alarm so much as the wolf within.

2012 Australian Christian Teen Writer Award Winner Daniel Li A short walk A series of dramatic vignettes charts the life of an unnamed protagonist in search of purpose and meaning. The tenacious witness and courageous action of a lifelong friend rescues the narrator from certain death and an eternity without God. The narrative is punctuated by a dream-like sequence set in a garden which serves as a metaphor for the spiritual journey. Written with elegance and aplomb, this story is at times raw and shocking but ultimately hopeful. I couldn’t fight them. One man was hard enough, five was suicide. I couldn’t run. They would hound me, and even if I managed to escape, they would return. I couldn’t negotiate. Clearly these were people who were

beyond sympathy and with that realisation, a new revelation: I now had to survive rather than escape. On my back, the first man, the one that had tailed me hauled me up and as he did, the crucifix necklace gifted to me by Che fell out. The thug cocked his head to the side, ‘Christian?’ he said slowly as if confused. One of the five stepped out, ‘That’s the one’ he accused. The first man’s stare bored into my fearful eyes and it was only then I noticed. This man … this man he was … ‘No room for you here mate’, he declared, and with that, dragged my struggling body to the Pool of Julian. ‘God save me!’ I yelled just as I was plunged into the waters of the fountain. Here erected was an immortalization of Julian. The personification of the notion of resolution against insurmountable odds, how ironic that an innocent man was now drowned under his baleful gaze. ‘God save me’ I thought as the hands that subdued me shook violently as if to shake the last vestiges of life out of my body. ‘God save me’ I thought as the waters obscured my vision and my world grew dark. As the last shreds of air left my body and my mouth opened to inhale the water in mighty gulps, another revelation dawned. Che had lied, and I was naive enough to believe him. That was the first time I died.